Pretending with the Playboy by Tracey Livesay

Title: Pretending with the Playboy 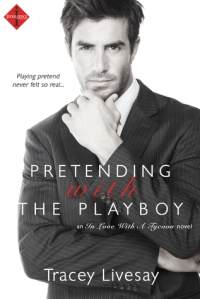 This is a romance where the man is running scared of love and commitment. Carter Richardson doesn’t trust love. He believes it makes you weak, especially after his personal experiences. This has made him into a love ‘em and leave ‘em playboy.

The only exception to this is his beloved aunt who brought him up after he was orphaned. He hasn’t been to the family home and has avoided involvement in the family shipping business whilst making a successful life for himself on the other side of the United States. He hasn’t even answered phone calls from his aunt for months now. When he learns she is terminally ill, he initially is still reluctant to face his fears and return to the family home but Lauren Olsen comes to get him. She was also orphaned and brought up by his aunt and they have a history . . . .

His aunt is worse than he feared and, in an effort to placate and calm her, he says that he and Lauren are engaged to be married! How will Lauren react to this? She’s already had her heart broken by him whilst a teenager – is it worth the risk now because the news makes his aunt so happy? They definitely have a strong chemical reaction to each other – is it worth the risk?

The book has characters that have been through lots of traumatic experiences, these have impacted on their ability to relate to others and it is only through coming to terms with the past that they can have any chance at a happy future together.

Thanks to the author, publishers and NetGalley too
for letting me read this book in exchange for this, an honest review.

Copies of this book are available from a variety of sources, including:

This entry was posted on December 29, 2014 by bicted in Adult and tagged 4*, Adult, Contemporary, Entangled Publishing, Indulgence, Life and Living, Pretending with the Playboy. Tracey Livesay, Romance.