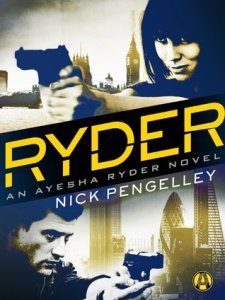 This is the first book I’ve read by this author and I certainly want to read more! This book has Ayesha Ryder, who was born in the middle East but is now a British Citizen working in London as an academic researcher specialising in Middle Eastern affairs, as the heroine. When another influential scholar, Sir Evelyn Montagu, who also specialised in the Middle Eastern affairs, is tortured and murdered Ayesha is called in to help the police with their enquiries. Sir Evelyn and Ayesha were very close friends (and lovers) and he has left clues for her to follow. These lead her into great danger as the race to discover just what T. E. Lawrence has left, something that could change to future for Israel and Palestine.

This is an edge of your seat, roller coaster ride filled with mystery, intrigue, danger and deception. It is brilliantly written, totally engaging and a fantastic read that I have no hesitation in recommending, one of the best books I’ve read in this genre so far and I look forward to reading others in this series in future! Watch out for the next book in the series being released on January 20th, 2015 – review to follow on that date!

2 comments on “Ryder: An Ayesha Ryder Novel by Nick Pengelley”