The Truth About Jack by Jody German

Title: The Truth About Jack 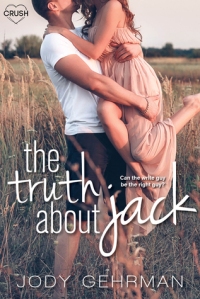 Dakota McCloud lives in a yurt on an artists’ colony, has been home schooled and is over the moon to find that she’s been accepted to study at the renowned art school she’s always dreamed of. Even better is that her boyfriend and best friend both also go to study in the same area so she can be with them both again! That’s when the email arrives. The email from her best friend. The best friend who has hooked up with Dakota’s boyfriend . . . The moon came crashing down. Dakota doesn’t know what to do, so she goes to chill on a beach. She doesn’t know she’s been followed by Jack Sauvage. He’s shy, been home schooled for a couple of years, is a talented pianist and he likes the look of Dakota but is unsure of himself and his ability to relate to her. When he sees her throwing a message in a bottle out into the sea and then finds that bottle washed up on the beach he thinks fate is at play. She has poured out all her angst and emotional turmoil into her letter in the bottle. He decides to write back to Dakota but pretends to be someone else when he does so . . .

I think the author did a tremendous job sharing the events from the points of view of the two main characters. Her writing is engaging and characters are well developed with events really brought to life. However, I’m not quite sure what I think of some aspects of Jack in this book. My problem is that I would hate to think of someone stalking my daughter as Jack does initially! I know he’s really the shy little rich kid but sometimes his actions in the first half are questionable. It does get better and you’ll need to read it yourself to find out what happens with Dakota’s ex, Jack and another potential love interest! I did like the ending!

Thanks to the author, publishers and NetGalley, too for letting me read an ARC of this book in exchange for an honest review.