Twelve years ago, I gave up the search for Mr. Right. After countless dates with frogs who never turned into my prince, I’d decided I’d rather be single than endure another night of listening to a man complain about his three ex-wives or brag about how much money he made. Of course, that’s when I got the email that would change my life. Here’s a snippet:

My name is Jason and I live in Milford. I hadn’t looked at the Speed Dating site in a long time, and then I received an e-mail that the site was shutting down. So I decided to take a last look and found you there. I guess my profile on the site is fairly accurate, but I never submitted a picture or completed any essays. Just from your profile, you sound like someone I would like to meet. So to fill in the gaps from the profile (and convince you that I’m not some crazy stalker) let me tell you a little more about myself. I also enjoy camping and hiking as well as traveling, mostly the US by car, but someday a bit more. I am a civil engineer and work in Ann Arbor. 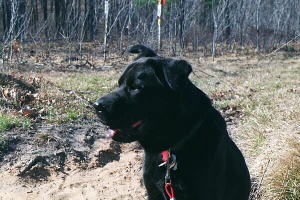 Boris the dog and I have a house in Milford, walking distance to downtown. We usually get a bunch of exercise walking all over town, but this cold makes it a little more challenging. He likes the cold much more than me. Or maybe the fur coat makes him not care…I’ll see if I can get a photo of myself to send to you…

We spent the re st of the day emailing back and forth. He didn’t get a photo of himself, but he did send me one of his dog, Boris and it was love at first site! Jason and I set up a phone call for the following day, and it was in that conversation, I learned his last name was Bell. My mother had told me that when she .met my father, she’d heard “bells” and I would too. I didn’t want to get my hopes up, but I had a feeling he was “the one.”

A day later, we met in person. As soon as I saw him, it was as if a piece of me recognized him as my soul mate. We talked for hours and only ended our date because I had a prior event. Rather than wait, he called me that night and we spoke another few hours on the phone.

Five months later, we were engaged and six months after that, we were married.

Then Boris…became my dog too.

She began writing upon the insistence of her husband who dragged her to the store and bought her a laptop. When she’s not working her day job, taking care of her family, or writing, you’ll find her reading the latest smutty romance.

An exhibitionist who’s waited her whole life to be seen …

The voyeur who’s always been watching …

As Danielle begins uncovering Cole’s secrets, the artistic voyeur arouses her deepest desires, and she surrenders to a fiery passion she never expected. But with time running out to save her stepmother, Danielle and Cole will face off against an evil growing more ruthless by the day … and discover a twisted web of lies, betrayal, and murder that neither saw coming.

After years as a slave to corporate America riding in Learjets and limos, Kristi Hancock dropped out of the business world to teach English and reading at an inner city school. A voracious romance reader since her teens, she was thrilled to discover she could write something more than technical manuals and business proposals. She lives with her husband, a tabby cat, a Maltese, and dozens of colorful fish. She loves being a passenger on her man’s motorcycle as they carve up winding mountain roads and speed across the local lake in their boat. With a Buddha statue on her desk, a teddy bear dressed like Shakespeare on her shelf, and a drawing of a skull with a Mohawk on her wall, she lets her imagination run wild as her characters tell her their naughty stories for all the world to read.

If any readers wish to share their own  worst or best pick-up line, feel free to do so in the comments below – I look forward to reading them! Thanks also to Barclay Publicity for organising this Summertime eReader Giveaway!

Are you ready to enter-to-win? Follow the giveaway stops for your chance to win one of these amazing prizes here: Summertime eReader Giveaway!