What Milo Saw by Virginia Macgregor 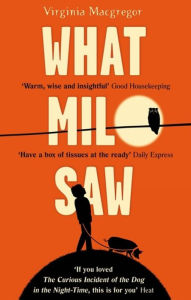 The star character in this book is the magnificent Milo who is a nine years old boy coping with turmoil and discord in his life. His parents have split up after Milo caught his Dad with the Tart, Milo’s been diagnosed as having the degenerative eye disease Retinitis Pigmentosa, which means he sees things differently to most people – like looking through a pinhole – and will eventually be totally blind. He always looks out for his Gran but was too slow to stop her setting fire to their kitchen.… and that’s just the start! Despite (or maybe because of?) his sight condition, Milo sees things that others often miss, he’s clever, resourceful, helpful and brave.

This is a superbly written story sharing things from different points of view in a totally engaging manner. Readers journey with Milo and his friends as he copes with his beloved Gran going into a care home where they really don’t care for their clients, to him becoming an undercover investigator and fighting for what’s right. There are other fabulous characters to meet along the way, including the fellow residents of the care home, Tripi (a Syrian refugee who is the amazing chef), a great Greek gentleman and, as well as many others, there’s his pet pig called Hamlet!

This is a marvellous enchanting read, with plenty of action, even a little romance for some of the adults and a delightful main character. It is poignant, sad, happy and sensitively written with plenty going on in a deceptively complicated plot to keep the reader enthralled to the very end. Highly recommend!

Thanks to the authors, publisher and NetGalley, too for letting me read an ARC of this book in exchange for an honest review.

One comment on “What Milo Saw by Virginia Macgregor”