Hot military heroes, the women who love them, and the devoted dogs that always have their backs.  EXTREME HONOR is the first book in a high adrenaline contemporary suspense series from Piper J. Drake published by Forever Romance. Fans of Jill Shalvis’s Animal Attraction series and Cindy Gerard’s One Eyed Jacks, will love this brand new action packed romantic suspense series.

David Cruz is good at two things: war and training dogs. The ex-soldier’s toughest case is Atlas, a Belgian Malinois whose handler died in combat. Nobody at Hope’s Crossing kennel can break through the animal’s grief. That is, until dog whisperer Evelyn Jones walks into the facility . . . and into Atlas’s heart. David hates to admit that the curvy blonde’s mesmerizing effect isn’t limited to canines. But when Lyn’s work with Atlas puts her in danger, David will do anything to protect her.

Lyn realizes that David’s own battle scars make him uniquely qualified for his job as a trainer. Tough as nails yet gentle when it counts, he’s gotten closer to Atlas than anyone else—and he’s willing to put his hard-wired suspicion aside to let her do the same. But someone desperate enough to kill doesn’t want Lyn working with Atlas. Now only teamwork, trust, and courage can save two troubled hearts and the dog who loves them both . . .

This is a great start to a new series. Three ex military men are working together training dogs for the military, police and others – though a lot of the time it may be more like training humans to work with the dogs.

One of their dogs had witnesses his handler being killed in action and the dog, Atlas, is suffering what I’d imagine is the doggy equivalent of PTSD. It is only after meeting Evelyn (Lyn) Jones that Atlas stops just going through the motions of living and actually shows more awareness of what is going on around her. It is a good job he does, too as danger lurks, threatening both of their lives!

Someone seems determined to stop Lyn working with Atlas, with military heroes, secrets to be uncovered and hearts to be mended it is an action packed military story where you’re not quite sure where the line of command is being breeched and love slowly but surely develops. With a range of hot alpha military heroes – especially Atlas, of course! – and packed with suspense this is an intriguing page turner that has really whet my appetite to read more in this series!

Thanks to the author, publisher and NetGalley, too, for letting me read an ARC of this book in exchange for this, an honest review.

Here’s an excerpt to whet your appetite!

David Cruz studied the woman standing in the front waiting area with equal parts irritation and interest. The room had an open design to accommodate dozens of owners and their dogs comfortably with enough space to prevent tussles the humans might not be able to break up without a trainer’s help. Of course, the area was empty of other people and dogs at the moment and this little bit of trouble filled the room just fine on her own. Her neat dress suit had to have been tailored to a fit so exact, it might as well have been a military dress uniform. And she wore it as if she was ready for inspection, her posture perfect with her shoulders straight, her chin up, and her hands easy at her sides. If her thumbs lined up with the side seams on her skirt, he’d have wondered if a cadet had gotten lost from the nearby military academy.

The severe grey fabric didn’t leach color from her face though, instead the contrast set off her peaches and cream complexion. Made him think of a dish of ice cream on a hot day. And even standing still, she radiated energy. Charisma. Like she could burst into motion at a moment’s notice and heaven help the man who got in her way. He had an urge to step right up and see if she could run him over.

Not likely, but it’d be fun to let her give it a try.

“Jones. Evelyn Jones.” Her sharp tone cut across his attempt to address the current issue with any semblance of calm. “Any and all documentation you might need is right there in the folder I handed you. If you’ll verify it instead of wasting both of our time trying to send me away, I’ll be able to get to what I’ve been sent here to do instead of standing around engaging in a pissing contest.”

Well, she’d come in ready for a fight.

Head held high and standing as tall as she could, her hackles would’ve been raised if she’d been a dog. The mental image was entertaining, to be honest, especially since her blonde hair was pulled back in a no-nonsense ponytail combined with the stylish poofed up effect. No idea why women did that but hell, she looked good.

And he did take a minute to appreciate her as she was: compact, curvy, and hot enough to catch the attention of every male on two legs walking the property. But her impact on the four-legged variety remained to be seen.

He could do without her glaring attempt at intimidation though and he wondered whether he shouldn’t send her sweet ass right on back out the door. If she crossed her arms over her admittedly impressive chest or otherwise altered her body language to increase her aggressive stance, he would. If her attitude was enough to scratch his temper, the dog she was here to see would rip her to shreds.

“Your credentials aren’t in question, Miss Jones.” He raised his hand to forestall another interruption. He’d had plenty of experience with her kind of sprint-out-the-gate, establish credibility immediately personality. It didn’t intimidate him one bit but he also wouldn’t be rushed. “As I was about to say, you could wait here and be run over by the incoming class of two-year-olds or you can come on in to the office area and have a cup of coffee while I make a few calls.”

She blinked and her cheeks flushed. “I…of course. A cup of coffee would be appreciated.”

Somehow, he doubted that considering the sour tone of her voice. It took some effort not to grin at her discomfort. “Glad you decided to come along. The two-year-olds aren’t a bad batch but their handlers are in some serious need of training. Go figure. ”

The corner of her very kissable mouth quirked. “Isn’t it always the human side of the pair in need of the real training?”

Now, they had some common ground after all. At least when it came to civilians.

But if he wanted to be fair—and hell, who did?—Military dog handlers needed heavy training at the beginning too. Especially if they wanted to reach the level of excellence required of a special forces working team.

He led her past the receiving desk and down a short hallway to a smaller area with chairs arranged for easy conversation. They had one of those little one cup coffee makers and she seemed fine fixing up her own mug. He preferred his coffee brewed in a real pot and none of those handy automated gadgets managed a strong enough brew.

The whole host and good manners thing dispensed, he headed for his office. “If you’ll just wait here…”

“It would save time if you showed me Atlas. I could introduce myself to him while you’re making your call.”

He halted, his temper simmered back up to the surface. “With all due respect, Miss Jones, you’re not meeting Atlas until I’ve straightened out exactly what is going on here.”

“It’s fairly straight forward. I’ve been brought in at the request of the Pentagon to work with the dog you refuse to introduce me to.” At the edge of his peripheral vision, her movement caught his attention. A slight raise of the chin. “It would save you time if you would take my suggestion before I make a call of my own.”

He studied her for the few seconds it took for his irritation to cool enough for polite conversation again. All bravado and possibly some real bite behind her threat. It depended on exactly who at the Pentagon had contracted her.

“You could save us even more time and leave now.” He turned to face her, calling her bluff. Lesser men backed down immediately under his glare. Took her a full five seconds to drop her eyes. “As far as the United States Air Force is concerned, Atlas was placed under the care of Hope’s Crossing Kennels with me as his official trainer. Currently, I’m willing to go through due diligence and consider a joint effort if your consulting credentials are confirmed. But if you truly did your homework on Atlas and this facility, you would know you either work with us or you are escorted off the property. This is not a general kennel where consultants are allowed to stroll in and work independently.”

After all, Hope’s Crossing Kennels wasn’t just a training facility for domestic pets. And the trainers who lived here weren’t civilians. 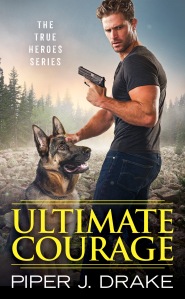 Elisa Hall is good at starting from scratch. Leaving an abusive relationship in her rearview, she packs everything she owns into the trunk of her car and heads for refuge with her friend in Hope’s Crossing, Pennsylvania.

Alex Rojas returned from his second deployment as a Navy SEAL to find his condo empty and divorce papers on the breakfast table. Now he’s building a life for himself and his daughter at Hope’s Crossing kennels training younger dogs and handlers to search and rescue, struggling to adjust to life back in the States and as a single father.

When Elisa shows up at the kennels, it’s obvious she’s running from something. Luckily, the dogs and trainers at Hope’s Crossing are more than capable of warding off trouble. And with every minute he spends with Elisa, Alex becomes even more and more determined to protect the woman he’s certain he won’t be able to live without…

Piper J. Drake (or “PJ”) began her writing career as “PJ Schnyder” writing sci-fi & paranormal romance and steampunk. She has recently received the FF&P PRISM award for her work as well as the NJRW Golden Leaf award and Parsec award.

Now, PJ is exploring the complexity of romantic suspense, incorporating her interests in mixed martial arts and the military into her writing.