Spotlight + Review: You Were Here by Cori McCarthy

Title: You Were Here 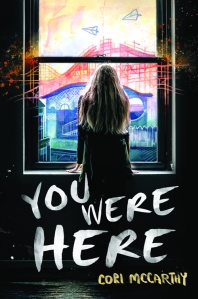 Jaycee is about to accomplish what her older brother Jake couldn’t: live past graduation.

Jaycee is dealing with her brother’s death the only way she can – by re-creating Jake’s daredevil stunts. The ones that got him killed. She’s not crazy, okay? She just doesn’t have a whole lot of respect for staying alive.

Jaycee doesn’t expect to have help on her insane quest to remember Jake. But she’s joined by a group of unlikely friends – all with their own reasons for completing the dares and their own brand of dysfunction: the uptight, ex-best friend, the heartbroken poet, the slacker with Peter Pan syndrome, and… Mik. He doesn’t talk, but somehow still challenges Jayce to do the unthinkable—reveal the parts of herself that she buried with her brother.

Cori McCarthy’s gripping narrative defies expectation, moving seamlessly from prose to graphic novel panels and word art poetry, perfect for fans of E. Lockhart, Jennier Niven, and Jandy Nelson.  From the petrifying ruins of an insane asylum to the skeletal remains of the world’s largest amusement park, You Were Here takes you on an unforgettable journey of friendship, heartbreak and inevitable change. 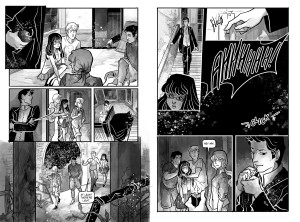 The death of a sibling and close friend is difficult at the best of times, but when it is a teen who was celebrating his graduation with friends, playing around and doing a dare in front of them, it has a dramatic impact on all of them and their relationships. Jake died whilst fooling around and doing a stunt he’d completed successfully hundreds of times before. Since then his sister, Jaycee, has been trying to recreate his daredevil stunts without any real consideration for keeping herself safe. It is five years since he died, she has just graduated and this story emotively portrays the affect Jake’s fatal accident had on those he left behind.

The story is portrayed from multiple points of view and includes graphic/comic style chapters as well as text. It is only as these characters start to reveal how they are coping with their grief that they can help each other heal and move on. It is a truly engaging, highly emotional portrayal of grief, a search for personal identity, filled with truths that are scarily heartbreaking but demonstrating that only by the truths being revealed do all concerned have any chance of meaningful relationships and a future to look forward to rather than a past to keep re-examining.

This is a very moving story, empathetically portrayed making it easy to relate to the characters and understand their actions and reactions. It is a story of growth and maturity, learning to live now and for the future rather than for events in the past. It is a chance for true friendships to overcome grief and for the past and departed to be remembered as they were rather than as idealised images. This is a superbly written by a very talented author who engages the reader, taking them into the scenarios and immersing them in this emotive story.

Many thanks to Sourcebooks Fire for providing an ARC of this novel for me to read in exchange for this, my honest review.

Praise for You Were Here

“The mix of forms as well as the insights each character gleans through their urban explorations render this book both readable and teachable on multiple levels.” –Bulletin of the Center for Children’s Books, STARRED Review

“Readers who appreciate stories of searching for personal truths will be happy to join this meaningful quest for identity and independence.” –Booklist

“You Were Here  is wrenchingly beautiful in its honest and achingly accurate portrayal of grief and how it breaks us–and the way unconditional friendship puts us back together.” –Jo Knowles, award-winning author of See You At Harry’s and Read Between the Lines

“Through razor-sharp wit, no-holds-barred momentum, and heart-wrenching twists, Cori McCarthy dares you to climb through the broken, abandoned wreckage of the past, stand on the edge of the world, and face something even scarier: the truth.” –K.A. Barson, author of 45 Pounds (More or Less and Charlotte Cuts it Out

“The urban explorers of You Were Here dive deep into the forgotten man-made spaces all around them–and their own feelings of loss, love, and fear. McCarthy deftly intertwines the characters’ stories, filling them with authentic pain and heartache as well as soaring moments of grace and humor. I dare you to read it!” —Maggie Lehrman, author of The Cost of All Things

Cori McCarthy studied poetry and screenwriting before falling in love with writing for teens at Vermont College of Fine Arts. From a military family, Cori was born on Guam and lived a little bit of everywhere before she landed in Michigan. Learn more about her books at CoriMcCarthy.com

Excerpt from You Were Here:

“What do I see?” I asked, turning back to the halo effect created by Margaret’s splayed hair. “It was a game. She died because she was playing a game.”

“Right,” I quipped, trying to mask not only my annoyance at Natalie’s psychoanalyst tone but also a flare of grief. My chest grew tight. Why wouldn’t it go away? Why did all this still buckle me to the ground? Tears burned my eyes, and I took my hair out of my ponytail. This never happened when I came here with Mik. Mik didn’t talk or prod. Mik let me be while we walked around Jake’s old haunt, wondering if he was actually haunting it.

“My dad said that OU will raze the TB ward.” Bishop pointed out the window toward the building on the very top of the hill, by far the spookiest and most unkempt in The Ridges compound. “It’s the only fully abandoned building.”

“End of the summer, I think. My dad said it was going to cost a ton but that leaving the old building there while it was falling in is just asking for lawsuits.”

“Jake loved the TB ward,” I said. “They haven’t stripped it down like this building.”

Bishop squinted at his friend. “TB has been one of the leading terminal diseases in society since the dawn of civilization, Zach.”

“But it doesn’t exist anymore,” Zach said. “Like leprosy.”

“It totally exists,” Natalie said. “And so does leprosy. Where do you learn these things?”

“TB is still the leading cause of death for all people with HIV,” Bishop said. “But don’t worry, Zach. You won’t get it.”

I was surprised to find Zach looking at me. “What kind of things are in there?”

I shrugged. “I’ve never been, but I know it’s more dangerous. All the windows and doors are boarded up to keep drunk undergrads out.”

“So there’s no way in?” Bishop asked.

I shook my head. “Didn’t say that. Every building in The Ridges compound is connected by basement tunnels. If we get into the basement, we can get into any building.”

We all shuffled to our feet and stood around the last portrait of Margaret Schilling.

“I’m in,” Bishop said, and I nodded. Bishop was cool; we’d been partners for two semesters straight in woodshop. He said odd, grandiose things sometimes, but I liked him for it. Plus there was a pretty good chance that Mik would show himself with only Bishop around.

“I’ll take you two to the exit,” I told Natalie and Zach.

Natalie looked at him, stunned. “You want to go? What about Kolenski’s three kegs?”

“Kolenski gets kegs every couple of weeks.” Zach shoved his hands in his pockets. He had sobered up since they’d entered The Ridges, and now he just looked worn down. Even his hair had flattened. I’d written him off years ago, but the way he’d helped me find Jake’s footprint and waylaid Natalie…maybe he wasn’t such a garden-variety “dude.”

“Who else can say that they did this the night after graduation?” he added with a shrug.

“Wait a second. It was my idea to follow you in the first place. And I…I want to see it.”

“Really?” Zach asked her. “Even if it’s dangerous?”

“I’m going to minor in history. It’ll be like walking around inside of history.”

I knew Natalie well enough to know that she was deluding herself, but when I opened my mouth to point it out, I saw something instead. Bishop did too.

“Apple.” He pointed to the ground. “Guys. There’s an apple.”

A shiny, green Granny Smith apple sat in the doorway. I picked it up.

“Where the hell did that come from?” Zach asked, fear trilling his voice. “Is someone else here? That wasn’t there a few minutes ago, right? Right?”

They all looked up and down the hall. Nothing.

“Maybe Jake’s ghost put it there. Or Margaret’s,” I said. A thump of what could only be described as happiness resounded through my chest. It was foreign and weird, and yet welcome.

“You’re smiling,” Natalie said. “Why are you smiling? You never smile.”

I rubbed the apple on my shirt and took a huge crunching bite. Natalie looked like she was going to pass out. I winked. “This way to the basement.”

Rafflecopter giveaway link for two copies of You Were Here

Many thanks to Sourcebooks Fire for organising the spotlight tour for this book and all providing the contents of this post – except for the review which is my honest opinion after reading an ARC of the books which was also provided by the publishers.

This entry was posted on March 4, 2016 by Splashes Into Books in Adult, Spotlight, YA and tagged 5*, Adult, Adventure, Comic/Graphic, Contemporary, Cori McCarthy, Grief, Life and Living, Picture, Sourcebooks Fire, spotlight, YA, You Were Here.