Review: Playing by Her Rules by Amy Andrews 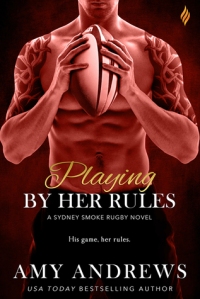 Title: Playing by Her Rules by Amy Andrews

This is a thoroughly enjoyable second chance romance where teen lovers meet up again under less than desirable circumstances more than eight years later.

He was her first love, the one she planned her future around – until she saw him kissing her worst enemy . . . Heartbroken she went off from Australia to study in the US. Now she’s back again as a journalist – the style columnist aspiring to be a feature writer.

She was his first love, the one he planned his future around until she threatened to sacrifice her dream scholarship to follow him and his uncertain path as a sportsman….

Now she’s been sent to do a six week special series on him. Six meetings. Will she get revenge for him breaking her heart or will they get a second chance at love? In a game where points count, who will win?

This is a great story, one packed with the angst of the past colouring the future expectations and present day interactions making it a dramatic story packed with hopes, fears, love, revenge and hot attraction. The characters are brilliantly portrayed (now come on, what do you expect with Amy Andrews as the author – they’re always brilliantly portrayed!). Their emotive interactions, the score keeping and the breaking down of walls around the heart take the reader through the full gamut of emotions. There are laugh out loud moments in the journey, as well as heartbreak and so much more. The secondary characters are essential ingredients in the story and I really hope to learn more about many of them in future novels in this new series – especially Griff and his daughter as well as Tanner’s team mates. This is definitely a series I’ll be looking out for in future!

P.S. Also thought the Glossary of words “readers may not know – both rugby ones and strange Aussieisms” were a brilliant – and sometimes hilarious – addition!

In this grudge match, the first to score…

When style columnist Matilda Kent accidentally lets slip that she was once involved with the captain of the Sydney Smoke rugby team, she suddenly finds herself elevated to the position she’s always wanted – feature writer. The catch? She’s stuck doing a six-part series on her ex. Still, there’s no way she can turn down a promotion…or the chance to dish the dirt on the guy who so callously broke her heart.

…could win it all!

Tanner Stone wants to be involved in a feature series about as much as he wants to snap an Achilles. But the thought of seeing Tilly again is a bonus—and has him more worked up than he wants to admit. Only he’s not prepared for how different she is – all cool and professional. His Tilly is still in there, though…and he still wants her, now more than ever. All he has to do is charm her into giving him a rematch. And this time, winner takes all!

One comment on “Review: Playing by Her Rules by Amy Andrews”