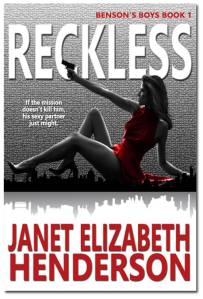 When Megan and Dimitri get together in Reckless, it’s like the Clash Of The Titans! Two strong personalities who are used to doing things their own way means that everything between them is a battle for dominance—not so great on the battlefield, but hot, hot, hot in the bedroom. ☺

Thank you for this enlightening Guest Post, Janet, I’m looking forward to reviewing your novel, Reckless, next week!

This entry was posted on July 23, 2016 by Splashes Into Books in Guest Post and tagged Barclay Publicity, Guest Post, Janet Elizabeth Henderson, Reckless.