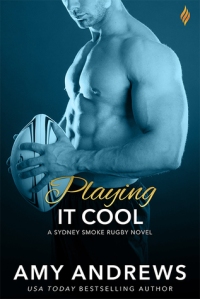 This is a smokingly hot romance with a rugby focussed hero, determined not to be sidetracked from his sporting career goals by anything or anyone . . . until he hears a journalist making obnoxious derogative comments to the curvy woman he’d been ogling earlier. It turns out that the woman is Harper Nugent and the journalist is her stepbrother, Chuck. Dex doesn’t like what he hears and makes a point of asking Harper out in front of Chuck. Harper has a poor self image because of the bullying and frequent belittling she’s been the target for from both her step mother and brother and doesn’t believe a hunk like Dex really wants to go out with her – but she’ll agree, just to show her step-family! However, one date leads to another and the attraction between the two is sizzling hot. However, with his focus on rugby and her negative attitude to her own body image, will their attraction have any chance to develop further?

Amy Andrews has a brilliant way of bringing her characters to life in the pages of her novels, making them real in the imagination of her readers. In this story she explores the difficult issues of body image and valuing your own achievements and talents. Harper may well not have a stick-like figure but Dex helps her realise he really is attracted to her and sees her as a curvy, sexy and clever beautiful young lady. He helps her realise she is attractive whilst she helps him realise there’s more to life than your career! It lives up to its Brazen publishing and is smoking hot at times. It is a highly emotive, thoroughly enjoyable read that I have no hesitation in highly recommending – I’ll certainly be continuing to look out for more by this author in future!

I was gifted a copy of this book by the author and publisher, via NetGalley, in exchange for an honest review.

Harper Nugent might have a little extra junk in her trunk, but her stepbrother calling her out on it is the last straw… When rugby hottie, Dexter Blake, witnesses the insult, he surprises Harper by asking her out. In front of her dumbass brother. Score! Of course, she knows it’s not for reals, but Dex won’t take no for an answer.

Dexter Blake’s life revolves around rugby with one hard and fast rule: no women. Sure, his left hand is getting a workout, but he’s focused on his career for now. Then he overhears an asshat reporter belittle the curvy chick he’d been secretly ogling. What’s a guy to do but ask her out? It’s just a little revenge against a poser, and then he’ll get his head back in the game.

But the date is better than either expected. So is the next one. And the next. And the heat between them…sizzles their clothes right off.

Suddenly, this fake relationship is feeling all too real…

One comment on “Review: Playing it Cool by Amy Andrews”