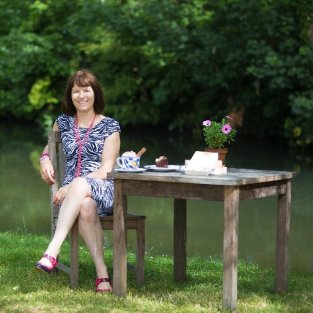 I am very happy to be able to share my interview with Nicky Clifford today, coinciding with the publication of her brilliant debut novel, Never Again, which I’m also sharing my review of today.

I am a real romantic at heart. When I was younger (all those years ago!), I used to dream up different scenarios where I would meet the most perfect (and of course gorgeous) man! So I can now draw on my miss-spent youth when I write my novels ☺

I prefer to write about a setting that I know, which is why Never Again opens its pages in the Swiss Alps. I worked in a hotel in Wengen for four months as part of my placement from Bournemouth University so I decided it would be a great place for my characters to meet.

I wish I could plan out my entire novel before I write it, but my brain doesn’t work that way! Instead, I think up the characters, build their backgrounds and then I take them to a location to see what happens next. The story pretty much writes itself, although I do have some dry spells where I have to rack my brains to move the story on. Occasionally, the characters surprise me and take a path I wasn’t expecting – I’m not sure if that is my innate creative brain being inspired or a worrying early sign of madness!

Most of the time I write in front of my laptop; I am a touch-typist so it is much faster. My handwriting is also very messy, so it is more reliable to put my thoughts straight into a document. I am, however, paranoid about backing up my work as it would be heartbreaking to lose hours or days or weeks of writing as I could never replicate it.

When I am on holiday lounging in the sun, I do write straight onto a notepad as it is easier than a laptop, what with the glare and the sun cream! I then have to force myself not to scrawl too much to ensure I can read back what I have written.

Oh my goodness, it is so hard to choose! I get so fond of my characters that it is almost like being asked to pick which of your children you like best! But if I was pushed, I would have to say that Elspeth in Never Again is one of my favourites. She was meant to be a minor character, but was incredibly persistent and managed to write herself a far bigger part. She is like a wonderful but extremely cheeky grandmother.

I would probably be Audrey because I also love baking. Whilst baking is Audrey’s way of releasing her emotions, she has an incredible talent as all of her muffins turn out light and fluffy (unlike some of my rather denser attempts…). Although I must admit I wouldn’t fancy some of the strange combinations she comes up with!

Now that is an interesting question. I tend to pick names that I like and those which are catchy or appropriate to their character or where they live. Someone once told me that the main characters shouldn’t be called names that start with the same letter as it can be confusing for readers, so I try to stick to this. After I had written the first draft of Never Again, I realised that there were two ‘Jacks’ in the story. I cannot believe I didn’t realise this before I reached ‘The End’… So I changed one of the Jacks to ‘Gareth’, but even now, I still can’t believe I did that.

So now that Never Again has been published, I am desperate to get back to immersing myself in my next novel and to see where the characters take me on this brand new journey!

Thank you so much for answering my questions, Nicky, and for writing such a brilliant novel. I can’t wait to read more from you in future! Read my review of ‘Never Again’ here!