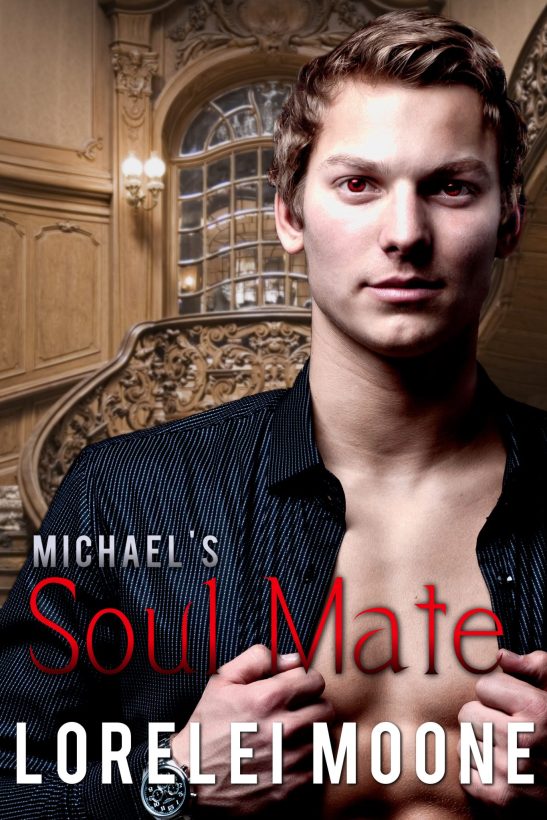 Synopsis: Some vampires have trouble figuring out how they want to spend eternity, but playboy Michael Odell isn’t one of them. He knows exactly what he wants: fine wines and beautiful women fuel his passion and he’s made it his mission to sample as many of either as he can. Fate has other ideas. One night, on his way home, Michael discovers a woman lying face-down in an alley, who is losing the fight to live. There’s only one way of saving her: The Ritual. Little does Michael know that this little act of mercy is going to change his life forever and before long he finds himself falling for the curvy stranger.

Anna doesn’t remember how she ended up discarded at death’s door in a dark alley, only that she woke up there. She doesn’t even know her last name. After coming face-to-face with her gorgeous rescuer, she passes out again and finds herself in a lavish mansion with a new lease on eternal life.

Who – or more importantly, what – is she now? And the people who tried to kill her – why were they after her? Anna is determined to figure it all out for herself. But before her questions are answered, she has to learn that even in this new immortal existence, it’s good to have friends – and perhaps a lover – by your side.

Michael buttoned up his woolen overcoat as he stepped outside. It was a starless night; the dense cloud cover had made sure of that. There was a certain electricity in the air, which to him suggested it might be about to start snowing.

Michael took a deep breath and closed his eyes. Yes, something was definitely coming. Could that be what had made him feel off for most of the night?

The frosty air surrounding the bar he’d just left seemed heavy with a great many aromas. Things that humans might never notice; for example, the scent of what remained of the fallen autumn leaves from that one tree down the street.

Michael turned to face the opposite direction. Chinatown was at least a mile away, but he could smell the restaurants from here.

He was tempted to stretch his legs a little and sprint home as fast as only a vampire could, but the roads were still too busy. He couldn’t risk someone watching him as he seemingly disappeared into thin air. The Council didn’t take kindly to vampires exposing themselves to humans at the best of times. Ever since the big showdown between Michael’s friend and mentor Alexander and Council leader Julius, they’d been under extra scrutiny. Julius would jump at the chance to punish Michael for supporting Alexander.

Things had really changed a lot in a short period of time, and not entirely for the better.

Michael opened his eyes again, resigned to the fact that he would either have to hail a cab or walk home at an excruciatingly slow, much more human-like pace.

He started to walk roughly in the direction of Hyde Park. If he found a quiet spot, he might still indulge himself in a little fun. As he crossed the busy street ahead, his nose caught a whiff of something unexpected, something metallic.

His instincts took over. He turned on his heel and sped up a little as he followed the smell. A low whimper urged him to speed up even further, but he couldn’t risk going any faster if he didn’t want to make a spectacle of himself.

There was a dark passageway in between two large office buildings. He made his way through and found himself in a quiet courtyard, which housed a number of large garbage bins. A woman’s foot peeked out from in between them. No human would have been able to see it in the dark, but Michael could.

Her breaths were labored and becoming shallower, and her heartbeat was slowing. Michael pushed one of the bins aside and kneeled beside the woman, who lay face-down on the ground.

It was obvious to him now; she was barely clinging on to life. He carefully turned her onto her back. Her lips had a purple tinge and her skin looked dry and unusually pale for a human.

The two dark marks on her neck spoke volumes.

For but a split second, her eyelids fluttered open. She seemed to see him and opened her mouth to speak, but no sound came. Then she slipped back into unconsciousness.

Michael tensed up. He ought to leave, pretend he never found her. The last thing he needed was for someone to find him here, standing over a dying woman who had clearly been attacked by one of his own. But he couldn’t bring himself to leave.

How pretty she was, how fragile, as she clung to her last shred of humanity.

Why had she ended up like this? Killing was against the rules. And discarding a drained body out in public where it could so easily be discovered? That was sacrilege.

His mind raced. Too many questions, not enough answers.

Michael gazed down at her face; the slightly parted lips, despite their unnatural color, still looked full and luxurious. As did the rest of her, actually. She made a beautiful corpse. Such a waste. This woman would have been a sight to behold before someone had decided to take her life for themselves.

He ran the back of his index finger along the side of her face. She twitched slightly, seemingly in reaction to his touch, causing him to pull away again.

No, he would not leave her, discarded among these bins of office refuse. This wasn’t the end she deserved.

Michael closed his eyes and tried to focus. Her heartbeat had become irregular, as though her body was giving up the fight. If he didn’t hurry, there wouldn’t be any life left to save.

Before he fully realized what he was doing, Michael nicked a vein in his wrist and pressed the newly created wound against her lips.

She was too far out of it, so he couldn’t compel her to listen, but that wouldn’t stop him.

Then, he picked up one of her arms and brought it to his own lips. He waited for what felt like forever. Was she too far gone already?

“Drink or you’ll die!” he urged again, fully aware she likely couldn’t even hear him.

Still, as more and more of his blood trickled out of the gash in his wrist, there was a subtle change in her. Her heartbeat seemed to strengthen. Her breaths became more controlled.

And then, out of nowhere, her free hand jerked up to grab his wrist and press it tightly against her mouth. Finally, she drank in deep gulps as her body tried to recover what it had lost.

That was his cue.

He bit into the wrist he’d been holding already and allowed himself the smallest of tastes. That completed the cycle. The Ritual was done.

She became still again and let go of his arm, her hand flopping down onto her stomach. Her eyes had remained shut throughout; she probably hadn’t even realized what had just happened.

He’d barely realized it too; he’d been acting purely on instinct. Now, as he stood up and inspected the smeared blood on his wrist, it hit him. He’d performed the Ritual. He’d created another vampire—tried to, anyway.

That was something he’d vowed he’d never take as lightly as his own maker had.

She wasn’t out of the woods yet; in fact, he wouldn’t know if she’d even survive the change until the following night, but for some strange reason, he’d jumped in and impulsively made the biggest decision of his immortal life so far.

Things would never be the same again.

IF YOU ARE LOOKING FOR ANOTHER SEXY VAMPIRE WHO FINDS HIS FOREVER MATE, DON’T MISS ALEXANDER’S BLOOD BRIDE, BOOK #1 IN THE STEAMY VAMPIRES OF LONDON SERIES!

Synopsis: Cat has never been a social butterfly. The only reason she even agreed to go to the stupid Halloween party was because her friend and room mate Shelly wanted to attend. When she gets spooked upon almost falling into bed with the host, she’s convinced it was all a big mistake. And what’s worse, now people are stalking her wherever she goes!

Alexander Broderick has been hosting his annual Halloween parties for over a century. While his contemporaries use them as an excuse to engage in all kinds of debauchery, his own motives are more benign. He wants to converse, to get a feel for the times they live in through its people. But when Cat walks into his house, he forgets himself and is compelled to seduce her. There’s only one problem: she’s a so-called Blood Bride – a mortal woman whose blood smells so delicious that every vampire in town wants to drain her.

He knows he’s the only one wanting to keep her safe, but can’t act as long as she wants nothing to do with him. And then there’s his own growing hunger to contend with. Can he protect her from the rest of the vampire community, as well as his own lethal cravings?

It’s the ultimate forbidden romance; the love between a mortal and a vampire. What is it that makes flirting with death so utterly tempting? Read on and find out.

Lorelei Moone is an up-and-coming author of paranormal romance based in London. A lover of all things sweet, and caffeinated, when she’s not writing about sexy bear shifters and their strong-willed curvaceous love interests, Lorelei can be found baking cookies or cakes for her family.