The Word is Murder by Anthony Horowitz

Title: The Word is Murder 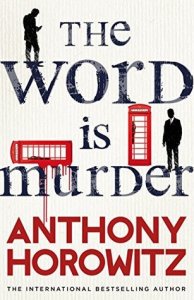 This is a quirky, highly original first person narrative starring the author in an Agatha Christie type role whilst working, somewhat reluctantly, with a Morse/Sherlock Holmes kind of private investigator called Hawthorne! The investigation is into the murder of Diana Cowper which happened just six hours after she’d arranged her own funeral. Hawthorne is an ex-police detective who is called in to assist with some of the more bizarre investigations and he’s also the man who wants Anthony Horowitz to shadow him during this investigation to enable him to write about him solving this murder.

The whole story is a real page turner, with a splendid mix of murder mystery, suspense and thriller with a large dose of more factual information concerning the author’s work as an author and scriptwriter. I found it a fascinating read with stories within stories like Russian Dolls you reveal as the story progresses. The author portrays his mood and attitude as events unfold as well as sharing many of his accomplishments which serve as background to the main story. His somewhat strained relationship with Hawthorne results in great banter between the two and the author is often portrayed as being inept in the investigation by Hawthorne’s comments and responses. Horowitz is reluctant to work with Hawthorne but is drawn in by the strange circumstances preceding the murder – like the reader, he wants to know what happened, so still keeps working with Hawthorne.

This has to be one of the most unique books I’ve read, complete with plenty of angst, twists and turns to keep readers guessing to the very end. The story is an enthralling skilful blend of fact and fiction, mixed together by a highly talented wordsmith to create a superb murder mystery that I have no hesitation whatsoever in highly recommending.

I requested and was given a copy of this book via NetGalley and this is my honest opinion after choosing to read it.

A wealthy woman strangled six hours after she’s arranged her own funeral.

A very private detective uncovering secrets but hiding his own.

A reluctant author drawn into a story he can’t control.

What do they have in common?

Unexpected death, an unsolved mystery and a trail of bloody clues lie at the heart of Anthony Horowitz’s page-turning new thriller.

SPREAD THE WORD. THE WORD IS MURDER.