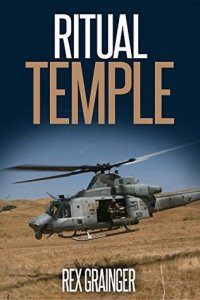 This is an enthralling, action packed thriller, exploring the trail of an journal giving details of a hidden temple with a powerful legend associated with it, one that many still seek to discover and will stop at nothing to prevent others getting there first. The journal was hidden in a church for centuries before being rediscovered, leading to murder, double crossing, secret meetings, espionage, kidnapping, shoot-outs and so much more!

Peter Harlow thought he’d left the dangers associated with his past job of being a private investigator well behind him as he now runs an antiquarian shop, However, when the owner of a rival establishment disappears, Peter is soon embroiled in the action – whether he wants to be or not! This is a fast paced adventure, with many opponents determined to thwart anyone else obtaining the journal. At times you’re not quite certain who is on which side – and even then, be ready for surprise betrayals!

The story is an engaging page turner that has the reader figuratively on the edge of their seats as the story progresses from one perilous situation to another. The writing flows well, keeping the reader engrossed in the story and I have no hesitation in highly recommending it!

Secrets and greed—the downfall of man.

Peter Harlow thought dodging bullets as a private investigator was long gone. The truth is, his past was just a taster for the real thing.

He finds himself embroiled in rival, Philip Kemp’s, antiquarian business, but Kemp is hiding from deadly forces and goes on the run with a journal locating the whereabouts of the lost legend deep in the Peruvian jungle.

In a case of mistaken identity, Harlow becomes hunted for the journal he doesn’t have. His only chance is to find Kemp.

Harlow teams up with IAA agent, Brenda Fischer, to find the journal, and subsequently, the legendary secret buried since 1571.

From gritty London to the depths of the Peruvian jungle Ritual Temple will take you on an ingenious adventure on a pursuit of an ancient artefact that holds the key to incredible, impregnable power.