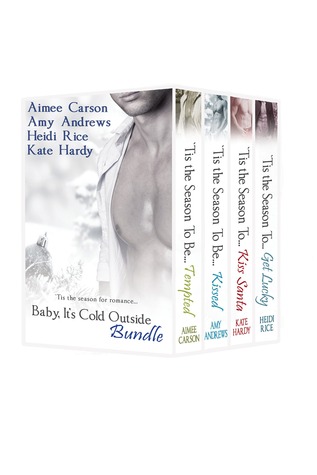 What a fabulous festive treat this proved to be! There are four novellas written by highly talented authors, each story featuring a different couple and set during a snowstorm in the festive season . The stories are all quick reads, great for getting readers in the festive spirit, I enjoyed reading them all!

’Tis the Season to Kiss Santa by Kate Hardy has the office Christmas Grinch ‘encouraged’ to play Santa to the siblings of terminally ill patients at the behest of his soon-to-retire boss, to prove he has heart and community spirit as well as business acumen. When he meets to pastry chef who is playing Santa’s elf, this is a festive recipe with great ingredients to create a heart-warming, tasty seasonal romance!

’Tis the Season to Get Lucky by Heidi Rice has lonely, workaholic marketing manager going in to work on Christmas Day. Whilst there she discovers the son of her boss ruining displays and inadvertently causing mayhem. When a sudden, severe snowstorm leaves them trapped in the store, discovering more about each other, exploring possibilities and having fun make this a fun, festive escapade!

’Tis the Season to be Kissed by Amy Andrews has a kindergarten teacher escaping to the cabin owned by her friend’s parents. She’s had no luck with love and has decided not to join Georgia in New York, mixing with all the happy couples. Instead she’s supping the pitcher of egg nog that Georgia has made for her when, unexpectedly, Georgia’s handsome, attractive, brother turns up. He’s spent 36 hours returning from duty in Afghanistan and had a horrendous journey . . . . and certainly didn’t expect to be greeted by a golf club wielding incumbent when he enters what he’d thought would be the deserted cabin. As the attraction between the two grows the snow traps them in but the atmosphere heats up as midnight and the New Year approach . . .

’Tis the Season to be Tempted by Aimee Carson is possibly my favourite of the bundle. It involves the rebellious younger sister returning home for the festive season. She’s anxious about flying, so has a drink to help her cope – but she’s a lightweight and it goes straight to her head. Hearing her making a fuss, Wes Campbell goes to help calm her down. Her brother is his best friend but this doesn’t help him turn off the attraction that builds between them – especially when a snowstorm has them stranded, sharing a room! Get ready for fun with kitchen utensils help tempt them both to explore possibilities and give romance a chance!

The stories have many things in common – great characters, a snowstorm and heart-warming romance. Each author puts their own festive take on their story and they are all easy, steamy reads. They also all end somewhat abruptly and I really wish they had epilogues to hint at what comes next – with them, they’d have been a 5* bundle! However, use your imagination and write your own epilogues as these are great festive reads that’ll help get you in the festive mood!

I requested and received a copy of this novel, via NetGalley. This is my honest review after choosing to read it.

‘Tis the Season to Kiss Santa by Kate Hardy

With the help of a sprig of mistletoe and some snow angels, a recently single pastry chef teaches a highly successful and sexy Scrooge the true meaning of the holidays on a snowy Christmas Eve that quickly heats up.

‘Tis the Season to Get Lucky by Heidi Rice

When a Christmas Day blizzard strands an up-and-coming marketing manager and her boss’s very off-limits, very hot playboy son in his department store, the two toe the line between naughty and nice as they unwrap their holiday presents—and each other!

‘Tis the Season to be Kissed by Amy Andrews

A down-on-her-romantic-luck kindergarten teacher plans to drown her New Year’s Eve sorrows in a gallon of spiked eggnog, but the arrival of her best friend’s sexy brother threatens to melt the snow piling up outside the tiny Vermont cabin.

‘Tis the Season to be Tempted by Aimee Carson

After the worst year ever, a jilted music manager rings in the New Year alone, swearing off men forever. But things get complicated when her brother’s best friend, the perfect man with the perfect body, tempts her to break her vow—if only for one hot night!