Drakon’s Past by N.J. Walters
(Blood of the Drakon #4)

Constance Owen has a unique talent, an innate ability to find hidden treasures – what a boon for someone who buys and sells artefacts and antiques! The Dragon sculptures she discovered hidden in a cellar give off a weird vibe which makes her uneasy. She wants to sell them quickly but decides to offer them one at a time. This leads to two very different factions endeavouring to obtain it and the other three. With her sister in peril, should she follow her head or her heart? Can she trust anyone to help her?

A Drakon, over four thousand years old, is lonely, especially after his brothers found their mates. When he is contacted about a dragon statue he needs to discover more. When he meets the person selling it he knows she is his fated mate – but why is she working with the Dragon Hunters? Can he trust her or is he risking himself and his brothers by being with her? What is her secret? Can he protect her and his own kind?

The story has a brilliant eclectic mix of characters, plenty of suspense and tension, as well as murder, mystery and romance! It flows beautifully, making it a real page turner and enthralling read. I have no hesitation in highly recommending it to anyone who enjoys stories packed with strong alpha males and independent, feisty females involved in a dilemma strewn race against time and enemies to help protect those more vulnerable than themselves. It is a delightful and fast paced addition to the series and a story which I thoroughly enjoyed reading.

Many thanks to Entangled for providing me with a copy of this novel to read and to Xpresso Book Tours for providing materials and organising this tour. The review, however, is my own honest opinion after reading the novel.

Constance Owens has a gift for finding unique items in the most unlikely places, which comes in handy since she buys and sells artifacts and antiques for a living. When she purchases a set of four dragon statues, she has no idea just how unique they are, or that finding them will thrust her into a world of secret societies, men who think nothing of kidnapping and murder to get what they want, and dragon shifters.

Nic hasn’t survived for four thousand years by letting his guard down, and he doesn’t trust anyone except his drakon brothers. The loneliness haunting him has been getting worse since all his brothers have found their mates. And when he finds the woman his drakon recognizes instantly as his fated mate, he doubts he’ll ever have what his brothers have, because it seems she’s involved with the secret society of hunters who have been hunting and capturing his kind for hundreds of years. 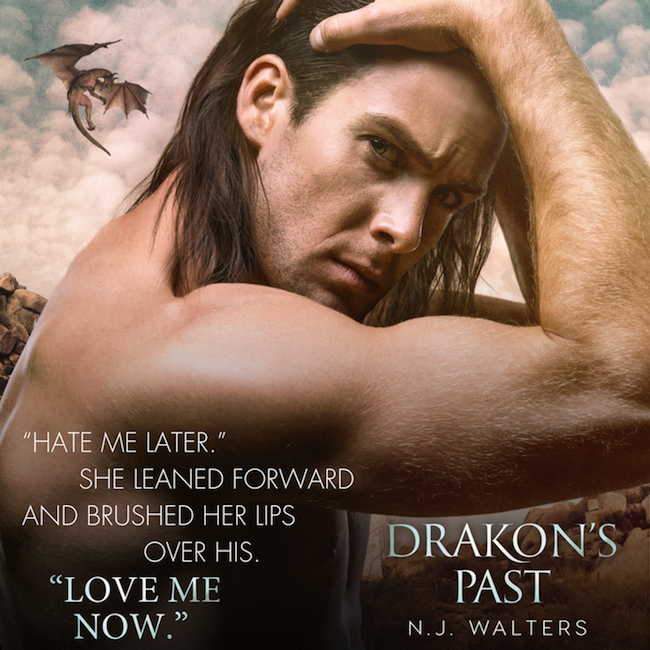 Constance blinked. She heard Abigail scream and some of the men yell. Nic had to be about fifteen feet long, and that wasn’t including his long, powerful tail, which was tucked around him.

He rose on his back legs and released his wings. The spread had to be at least double the size of his body.

Nic was a dragon.

She shook her head. Impossible.

She’d had sex with a dragon. She was in love with a bloody dragon. How was this even possible? Then she remembered what Nic had told her about Dent and how the group he belonged to wanted to capture him and drink his blood. She couldn’t let that happen.

But it was too late. Dent fired at her again, and Nic pounced, coming down over her. She feared he might crush her with his gigantic body, but instead, he crouched above her like some big watchdog, shielding her from any further bullets.

The moment he was inside the circle, something changed. He roared as though he was in pain. She scrambled out from beneath him. “Nic? Nic, what’s wrong?” Stupid question all things considered, but this was something different, something he hadn’t been expecting.

These statues were dangerous to him.

He turned his big head toward her and opened his mouth. God, those were big teeth. All the better to eat her with. Yeah, not a pleasant thought. In this form, she’d barely be a snack.

“Run.” The word was guttural, as though it had been pulled from him.

Once upon a time N.J. had the idea that she would like to quit her job at the bookstore, sell everything she owned, leave her hometown, and write romance novels in a place where no one knew her. And she did. Two years later, she went back to the bookstore and her hometown and settled in for another seven years.

One day she gave notice at her job on a Friday morning. On Sunday afternoon, she received a tentative acceptance for her first romance novel and life would never be the same.

N.J. Walters is a New York Times and USA Today Bestselling author who has always been a voracious reader, and now she spends her days writing novels of her own. Vampires, werewolves, dragons, time-travelers, seductive handymen, and next-door neighbors with smoldering good looks—all vie for her attention. It’s a tough life, but someone’s got to live it.