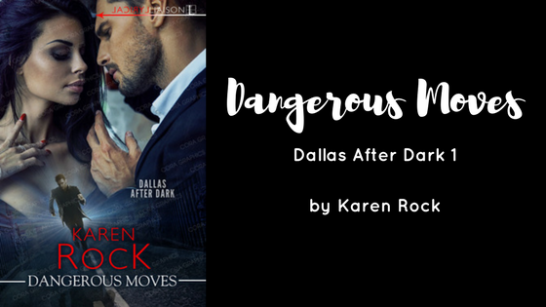 Well I have to say this was a great surprise in a really good way! It is a romantic suspense that also had me laughing out loud at times and definitely not wanting to put it down until I’d finished it. My advice is grab yourself a copy and read it for yourself, rather than reading my review!

For those who are still reading this, just imagine a cop going undercover to work as a dancer in an elite male strip club! No wonder this story is called ‘Dangerous Moves’ – he certainly needs to learn the moves in his new role! His new boss is Reese Landon, who has returned to run the club after her father was shot and went into a coma. She’d been dancing her way around the world and hadn’t been home for many years because of what happened made her leave and drove a wedge between her and her father. She’s hoping to reconnect with him but there are secrets to be uncovered and danger all around. It seems she is now in the firing line for whoever shot her Dad. Can Detective Blake Knight learn to perform on stage? Can he protect Reece and keep her safe? On top of all that can they ignore the attraction which they both feel – or will love find a way to get them together?

The story is beautifully written, flowing smoothly and engaging the reader with the superb mix of humour, suspense, drama and steamy romance. The characters are well developed and easy to relate to, the plot enthralling and the whole story a great read. It is a story of searching for the truth, protecting your family, being brave and facing your fears as well as being deceived. I thoroughly enjoyed this story, the first in a new series, and I can’t wait to read the next book which tells Nash’s story!

I requested and received a copy of this novel. This is my honest review after choosing to read it.

Pounding music. Sculpted men. And a conspiracy that could cost far more than a few dollar bills . . .

Detective Blake Knight has been undercover before. But an assignment to bust a steroid ring running out of Dallas’s elite male strip club means his new cover will be nothing but his own taut muscles and oiled skin. It’s one thing for the tough, by-the-books agent to take down bad guys with his gun. Facing a rowdy crowd in only a G-string is another story . . . especially in front of his new boss, gorgeous, mysterious Reese Landon.

Her father’s club and shady business practices bring back terrible memories for Reese. But when he’s shot and goes into a coma, she vows to protect him the way he never did for her. That means keeping the police at a distance—especially sexy, driven Detective Knight. If she has to give him a cover job, it would be a crime not to put that glorious ass on stage. But no matter how good he looks in a Velcro uniform, she can’t trust him, or give into the undeniable heat between them. They’re both chasing the truth. And it might expose more than either wants to show . . .