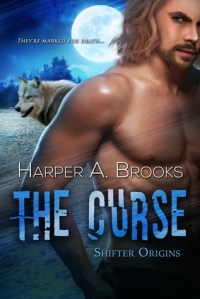 Title: The Curse by Harper A. Brooks

This is a different take on werewolf lore and, even though this is the second book in the series, it still works well as a standalone IMHO. In this lore, any werewolf who hasn’t found their soul mate before their twenty-fifth blue moon will die and both Astrid and Erec are approaching this date with destiny – there are only three weeks left for them to find their true love.

Astrid is the stubborn, determined and very protected daughter of the pack Alpha, especially so since her mother died. She is something of a rebel, insisting on learning to fight with the males, even though this is unknown. She enjoys exploring and hunting and, whilst out on such an expedition she discovers that a neighbouring pack have been attacked by a rogue pack who are determined to make all the regional packs into one huge pack with just one Alpha. Even though she senses danger, she also senses Erec, the adopted son of the Alpha of the decimated pack and helps to rescue him. Erec is determined to take revenge on his pack’s murderers and not to be distracted by his attraction to Astrid. The story follows the two as they work together to help protect the pack, rescue members of his father’s pack and attempt to thwart the attackers who are trying to take over.

This story is packed with drama, intrigue and suspense as well as romance, all skilfully woven to create a real page turner that I thoroughly enjoyed. The descriptive scene setting, well developed characters and excellent plot make this a compelling read and I particularly appreciated that the author avoided graphic sexual encounters – her story is so well crafted it definitely didn’t need them to keep the reader engaged. I will definitely be looking out for more by this author in future and have absolutely no hesitation in very highly recommending this story to anyone who enjoys superb paranormal suspense filled romances!

I requested and received a copy of this novel via NetGalley. This is my honest review after choosing to read it.

For wolf-shifters like Astrid marked by the curse, time is running out. If she doesn’t find her soul’s mate before her twenty-fifth Blue Moon rises, she will die. And with only three weeks left, things aren’t looking good for her. True love just doesn’t fall out of the sky.

Lone wolf Erec is determined to stop a crazed killer from harming anyone else. Even if it means helping a rival pack. But he never expected to feel such a pull for the alpha’s beautiful daughter, Astrid. He doesn’t have time for distractions if he wants to find a killer before his final Blue Moon rises.

Danger looms, and the swirling patterns on their skin mark them for death, but Astrid and Erec are willing to do whatever it takes to save the pack, even if they die trying.

Each book in the Shifter Origins series is STANDALONE:

*The Hunt
*The Curse