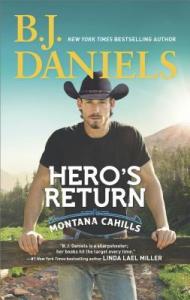 This is an enthralling romantic suspense, one where the focus is possibly more on the suspense than the romance, though both have significant roles to play in the story. Whilst it is the fifth book in a series, I believe it works well as a standalone.

When he was seventeen, Tucker Cahill left his home and family and hasn’t been home or in contact with any of them since then, which is more than eighteen years ago . When the body of a young woman turns up near a creek by his family’s ranch the publicity means he hears about it and returns home, stopping first at the local Sheriff’s office to suggest who the body might be.

When he goes out to near where the body was discovered, someone else is looking at the scene and runs when she spots him. She is Kate Rothschild, an investigative journalist with a personal interest in the remains, an interest she’s determined to follow up on. As these two connect, there’s mutual attraction between them but also so many secrets! As they endeavour to discover just who the body was and what happened to her they’ll face the past and uncover more secrets in the process as well as being placed in potentially deadly situations.

This plot is so full of twists and turns, the reader is never quite sure what will be revealed next! It keeps you figuratively on the edge of your seat and there’s never a dull moment. Secrets of other characters are also revealed, babies are born and families reunited, making this a highly entertaining read and great addition to the series.

I requested and received a copy of this novel via NetGalley. This is my honest review after choosing to read it.

The prodigal Cahill is back—and ready to confess

Tucker Cahill disappeared from Gilt Edge, Montana, hoping to escape a secret that has haunted him for nineteen years. Then, when a young woman’s remains are found in the creek near his family’s ranch, he has no choice but to face his demons. The truth that sent him running years ago could take away his freedom now.

Kate Rothschild came to town looking for vengeance—and Tucker Cahill. What she finds is a tortured and irresistible man who’s more than meets the eye. Caught up in the past, they are drawn deeper into a twisted game that’s not over yet. And the consequences could prove fatal for them both…