This YA fantasy adventure with a touch of romance is the story of what happens when an accident in the Atlantic Ocean brings a fate, no one could imagine. Follow the tour for reviews, excerpts, and enter to win a $50 Amazon gift card! 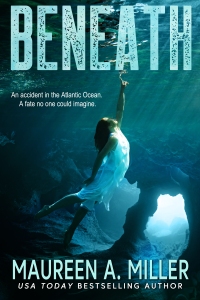 An overnight fishing trip on the Atlantic Ocean…

It was Stella Gullaksen’s final break before starting her freshman year at college. Joining her best friend, Jill, and Jill’s family aboard the STARKISSED, Stella wakes to a violent storm that capsizes the boat over a hundred miles off the New Jersey shore.

As the waves haul her under Stella knows that she is going to die. Instead, an unusual current drags her deep into the underwater canyons of the Atlantic Ocean. Powerless against the raging waters, she is suddenly sucked into a ventilated cave. One by one, Jill and her family also emerge in the sunken cavern.

With only a faulty diving flashlight to keep oblivion at bay Stella and her best friend’s brother, Colin, search the cave in hope of finding a way back to the surface. What they discover, however, is that they are not alone. There are other survivors in this subterranean grotto–survivors spanning decades of maritime disasters.

Will this discovery prove salvation, or have they all been condemned to the same fate? A grim finale at the bottom of the sea?

On an alliance forged by friendship and attraction, Stella and Colin battle to escape the danger that lies beneath. 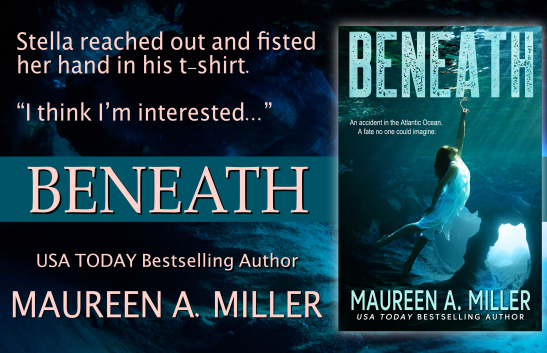 An excerpt from Beneath to whet your appetite!

She was going to vomit.

Stella Gullaksen looped her arm through the tuna tower ladder. The LED spotlights cut through the storm, revealing a pool of seawater on the cockpit floor of the sport fishing boat. The brine was creeping up to her calves now. Across from her, Col, her best friend’s brother, wrapped a rope around his arm like a boa constrictor. Dark hair was pasted to his forehead and his eyes were lost in the night, but the bright red coil in his free hand was visible enough. He nodded at her and tossed it.

Stella clawed at the darkness, squinting against the blinding fusion of rain and saltwater. The rope unraveled, winding through the water, eluding her grappling hand. Finally, she latched onto it and read his encouraging nod to secure it around herself. Trembling fingers attempted the task, but another black wave smashed into the hull, cascading against her hip and nearly tossing her over. She clung to the aluminum rigging.

This was to have been a weekend fishing jaunt, a last respite before her freshman year in college. Stella’s best friend, Jill Wexler, was also a freshman at the same college. They met each other as freshmen in high school when Stella moved to Monmouth County from Pennsylvania. They were polar opposites in personality, but somehow it worked, and they had been attached at the hip since.

Jill’s parents owned the STARKISSED, a 32’ Topaz Express saltwater fishing boat. It was a tight squeeze to fit Donald and Anne Wexler, their eighteen-year-old daughter, Jill, their twenty-year-old son, Colin, along with Stella. It was only for a night, though. It took too long to reach the New Jersey underwater canyons, where yellowfin tuna fishing was at its best. They had to spend the night out at sea and were due back into port late tomorrow evening.

Inside the cockpit, she saw Don Wexler hunched over the steering wheel, smacking the radar display. His curses were loud enough to carry over the maelstrom.

“I checked with the Coast Guard. I checked the satellite. The weather was clear!”

The defense seemed lame given their current predicament. Did it matter what the weather report claimed? They were over a hundred miles off the coast of New Jersey in the center of a mean tropical storm. The fact that it was the middle of the night was just a cruel bonus.

Stella cast a frantic look at the cabin hatch now submerged under several inches of water. Jill was down there, along with her mother. Only a few moments ago Stella had been with them. When the storm struck, her stomach was the first to protest. She rushed up to the cockpit in search of air, and instead, emerged into chaos.

Enter to win a $50 Amazon gift card by following this link to the Rafflecopter giveaway:
http://www.rafflecopter.com/rafl/display/b050ef29495/?

About Maureen A. Miller:

USA TODAY bestselling author, Maureen A. Miller worked in the software industry for fifteen years. She crawled around plant floors in a hard hat and safety glasses hooking up computers to behemoth manufacturing machines. The job required extensive travel. The best form of escapism during those lengthy airport layovers became writing.

Maureen’s first novel, WIDOW’S TALE, earned her a Golden Heart nomination in Romantic Suspense. After that she became hooked to the genre. In fact, she was so hooked she is the founder of the JUST ROMANTIC SUSPENSE website.

Recently, Maureen branched out into the Young Adult Science Fiction market with the popular BEYOND Series. To her it was still Romantic Suspense…just on another planet!

Many thanks to Barclay Publicity for providing the materials for this post.

This entry was posted on April 6, 2018 by Splashes Into Books in Blog Tour, Excerpt, YA and tagged Adventure, Barclay Publicity, Beneath, Blog tour, Contemporary, Excerpt, Fantasy, Giveaways, Life and Living, Maureen A Miller, Mystery, Paranormal, Rafflecopter giveaway, suspense, YA.