Caught Up in a Cowboy by Jennie Marts

This cowboy plays to win… 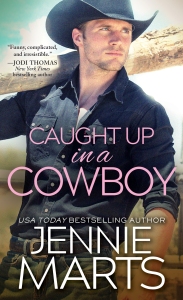 Title: Caught Up in a Cowboy

What a heartwarming second chance romance this proved to be, complete with a delightful eight year old, cowboys, a conman, injured hockey player and plenty of angst and turmoil to make it a real page turner – loved it! Rockford James has returned to his family ranch to recuperate after being badly injured  whilst playing ice hockey in the NFL. He left town nine years ago, rarely returning and left behind his high school sweetheart, Quinn Rivers. Heartbroken, soon after he left she had too much to drink and a one night stand that left her pregnant and she now has a lovely eight year old son, Max. Max is the one good thing to come out of the whole debacle and she loves him dearly. Now Rock is back, even if it is only for whilst he recovers. As their love rekindles, can they put the past behind them and move on to a future together? What about the father of Max? He’s always denied Max is his offspring, but what happens when he comes back into their lives?

This is a story of family, friendship, and second chances. However, sometimes some people really don’t deserve their second chance but working out who does and doesn’t can be perplexing, especially when you’re unsure of their motives! The characters are well developed and the story an emotional roller coaster with young Max as the focus of many indecisions as everyone strives to do their best for this special young man. There are incidents, accidents, attacks and even some time in court in this thoroughly enjoyable, emotively written story which is liberally sprinkled with both turmoil and humour. I have no hesitation in highly recommending it.

I requested and was given a copy of this novel, via NetGalley, with no obligation. This is my honest review of the book after choosing to read it.

Rockford James was raised as a tried-and-true cowboy in a town crazy about ice hockey. Rock is as hot on the ice as he is on a horse, and the NHL snapped him up. Now, injuries have permanently benched him. Body and pride wounded, he returns to his hometown ranch to find that a lot has changed. The one thing that hasn’t? His feelings for high school sweetheart and girl-next-door Quinn Rivers.

Quinn had no choice but to get over Rock after he left. Teenaged and heartbroken, she had a rebound one night stand that ended in single motherhood. Now that Rock’s back—and clamoring for a second chance—Quinn will do anything to avoid getting caught up in this oh-so-tempting cowboy…

An image to whet your appetite: 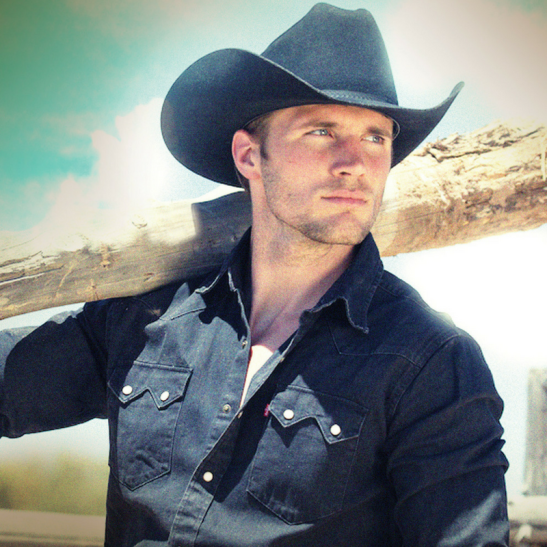 Here is a photograph of the person upon whom the author based the hero of this story, Rockford James!

An excerpt to whet your appetite:

Bits of gravel flew behind the tires of the convertible, and Rockford James swore as he turned onto the dirt road leading to the Triple J Ranch. Normally he enjoyed coming home for a visit, especially in the late spring when everything was turning green and the wildflowers were in bloom, but not this spring—not when he was coming home with both his pride and his body badly injured.

His spirits lifted and the corners of his mouth tugged up in a grin as he drew even with what appeared to be a pirate riding a child’s bicycle along the shoulder of the road. A gorgeous female pirate—one with long blond hair and great legs.

Legs that belonged to the only woman who had ever stolen his heart.

Nine years ago, Quinn Rivers had given him her heart as well. Too bad he’d broken it. Not exactly broken—more like smashed, crushed, and shattered it into a million tiny pieces. According to her anyway.

He slowed the car, calling out as he drew alongside her. Her outfit consisted of a flimsy little top that bared her shoulders under a snug corset vest and a short, frilly striped skirt. She wore some kind of sheer white knee socks, and one of them had fallen and pooled loosely around her ankle.

“Ahoy there Matey—you lose your ship?”

Keeping her eyes focused on the road, she stuck out her hand and offered him a gesture unbecoming of a lady—pirate or otherwise. Then her feet stilled on the pedals as she must have registered his voice. “Ho-ly crap. You have got to be freaking kidding me.”

Bracing her feet on the ground, she turned her head, brown eyes flashing with anger. “And here I thought my day couldn’t get any worse. What the hell are you doing here, Rock?”

He stopped the car next to her, then draped his arm over the steering wheel, trying to appear cool. Even though his heart pounded against his chest from the fact that he was seeing her again. She had this way of getting under his skin—she was just so damn beautiful. Even wearing a pirate outfit.

“Hey now—is that any way to speak to an old friend?”

Ouch. He’d hoped she wasn’t still that bitter about their breakup. They’d been kids, barely out of high school. But they’d been together since they were fourteen, his conscience reminded him, and they’d made plans to spend their future together.

But that was before he got the full ride scholarship and the NHL started scouting him.

And he had tried.

Yeah, keep telling yourself that, buddy.

Okay, he probably hadn’t tried hard enough. But he’d been young and dumb, and swept up in the fever and glory of finally having his dreams of pursuing a professional hockey career coming true.

With that glory, came attention and fame and lots of travel with the team where cute puck bunnies were ready and willing to show their favorite players a good time.

He hadn’t cheated on Quinn, but he came home less often and didn’t make the time for texts and calls. He’d gone to college first while she finished her senior year, and by the time he did come home the next summer, he’d felt like he’d outgrown their relationship, and her, and had suggested they take a mini-break.

Which turned into an actual break, of both their relationship and Quinn’s heart.

But it had been almost nine years since he’d left—they’d been kids, and that kind of stuff happened all the time. Since then, he didn’t make it home a lot, and had only run into her a handful of times. In fact, he probably hadn’t seen her in over a year.

But he’d thought of her. Often. And repeatedly wondered if he’d made the right choice by picking the fame and celebrity of the career and letting go of her.

Sometimes, those summer days spent with Quinn seemed like yesterday, but really so much had happened—in both of their lives—that it felt like a lifetime ago.

Surely she’d softened a little toward him in all that time. “Let me offer you a lift.” The dirt road they were on led to both of their family’s neighboring ranches.

“No thanks. I’d rather pedal this bike until the moon comes up than take a ride from you.”

Nothing he could do if she wanted to keep the grudge fest going. Except he was tired of the grudge. Tired of them being enemies. She’d been the best friend he’d ever had. And right now he felt like he could use a friend.

His pride had already been wounded, what was one more hit? At least he could say he tried.

Although he didn’t want it to seem like he was trying too hard. He did still have a little pride left, dammit.

Jennie Marts is the USA Today bestselling author of award-winning books filled with love, laughter, and always a happily ever after. She is living her own happily ever after in the mountains of Colorado with her husband, two dogs, and a parakeet that loves to tweet to the oldies. She’s addicted to Diet Coke, adores Cheetos, and believes you can’t have too many books, shoes, or friends. Find her online at jenniemarts.com.

Follow this link to the Rafflecopter Giveaway and enter for the opportunity to win a copy of “Caught Up in a Cowboy” by Jennie Marts for yourself!

Many thanks to the publishers for providing information and images for this post – and for gifting me a copy of the book, without obligation. I chose to read the book and the review in this post is my own, honest opinion after doing so.

6 comments on “Caught Up in a Cowboy by Jennie Marts”

This entry was posted on April 27, 2018 by Splashes Into Books in Adult and tagged 5*, Adult, Adventure, Caught Up in a Cowboy, Contemporary, Cowboys of Creedence, Jennie Marts, Life and Living, Romance, Second chance romance, Series, Sourcebooks Casablanca.