Have you Pre-ordered MAKE ME CRAVE Yet?

In MAKE ME CRAVE by NYT Bestselling Author, Katee Robert, Roman Bassani will do anything to close a deal. Even chase down Allie Landers on her Caribbean vacation to make an offer on her company.

Pre-order MAKE ME CRAVE and add it to your TBR pile on Goodreads! Then keep reading to get a sneak peek excerpt and enter the giveaway for a $25 Amazon gift card or one of three (3) ebooks from Katee Robert’s backlist! 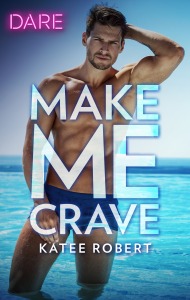 Can their hunger be satisfied?

Roman Bassani will do anything to close a deal. Even chase down Allie Landers on her Caribbean vacation to make an offer on her company. He expects a challenge—but not their immediate intense attraction. After an accidental one-night stand they agree to put business aside—for now. The island lulls them into a heated sexual journey…but what happens to their opposing interests when they return from paradise?

“Dare is Harlequin’s hottest line yet. Every book should come with a free fan. I dare you to try them!”

Praise for Make Me Crave

“Make me Crave by Katee Robert is such an amazing and captivating read that you will not put it down. Sexy, fiesty, hotness, chemistry, laughter and love Make me Crave is a must read for all book lovers. This is hands down in my opinion the best book that I have ever read by Katee Roberts.”—Goodreads review

“Wow! I can’t emphasize enough how much I loved Make Me Crave (Make Me #2). It has sass, steam and great characters with loads of chemistry. Katee Robert is definitely an author on my ‘must read’ list.”—Goodreads review

“Hello Adonis! Roman is just…yeah. I mean, sex on a stick with a good heart (despite his past misdeeds), and a more than capable brain! Allie is his perfect match and their time together sets the pages on fire while making you root for them to get more than just the pleasure they find from each other on the island! A great book!”—Goodreads review

Enter to win a $25 Amazon gift card or one of three (3) ebooks from Katee Robert’s backlist!

Tomorrow would be soon enough for them to go exploring and try out the stand-up paddleboards Allie had eyed when she’d checked out the beach.

Her face heated at the fact she’d been caught topless sunbathing. Whoever that guy was, he’d been far off enough that she couldn’t clearly see his face. Those shoulders, though… Allie shivered. Even at a distance, she’d seen the cut of his muscles and how purposefully he’d maneuvered the kayak through the turquoise waters. The island must have already gone to her head, because she’d spent a truly insane moment hoping he’d come to shore so she could get a better look at him.

Maybe more than a better look.

Allie laughed at her fanciful thoughts. Vacation hookups were all well and good, but if that was what she’d wanted, she’d chosen the wrong place to go. Isolation and relaxation were the name of the game on West Island, which was exactly what she’d craved when she let Becka talk her into booking the trip. It was the exact opposite of New York and her life there.

But now she found herself wondering if maybe something slightly more chaotic would have been a better choice. The sun and sea had soaked into her blood and the heady feeling had her convinced anything was possible. It was only a week. The perfect length of time for a fling…

If she wasn’t on a private island in the middle of the ocean without a single man in sight.

She bypassed the little golf cart that was one of the main forms of transportation here. It felt good to walk after being cooped up on the plane and then lying prone while she sunned herself. She usually taught at least one class a day at Transcend—more if she needed to cover someone else’s schedule—so being inactive wasn’t natural for her. It was only a mile or two to the restaurant and the day had started to cool as the sun reached for the horizon. It’d be downright pleasant tonight.

She’d make sure to wake early and attend one of the yoga classes offered, and the rest of the day would be filled with activities that would keep restlessness from setting in. There was even scuba diving available, though Allie wasn’t sure she was feeling that adventurous. Snorkeling? Sure. Going deeper with only a tank and a few tubes between her and drowning? That would take a whole lot more convincing.

The path was cleared and well maintained to allow the carts to drive without problems, so she let her mind wander as she fell into a natural stride that ate up the distance without tiring her out. Every once in a while, the path would branch off in different directions, some heading toward other villas, some heading deeper inland. There was a small selection of hiking trails that offered tours of the history of the island.

She made it to the restaurant easily, and found it practically deserted. Allie paused in the doorway, wondering if she’d misunderstood the woman who’d checked them in. Maybe it was closed?

She jumped and spun around. The man stood a respectable distance away, but his sheer size ate up the space and made her feel closed in. She froze. I’d recognize those shoulders anywhere. Confirming her suspicion, his gaze slid over her body as if he was reminding himself of what she looked like with nothing but what she’d worn on the beach. She tried to swallow past her suddenly dry throat. “You.”

“Me.” He finally looked her in the face, and she rocked back on her heels. The man was an Adonis. There was no other way to describe his blond perfection, from his hazel eyes to the square jaw to the cleft in his chin to the body that just wouldn’t quit. He might be wearing a shirt now, but the button-down did nothing to hide his muscle definition.

He held out a wide hand with equally perfect square fingers. “Let me buy you a drink?”

“We’re at an all-inclusive resort.”

His lips twitched, eyes twinkling. “Have a drink with me.”

Oh, he was good. Charm practically colored the air between them, and she had the inexplicable impulse to close the distance and stroke a finger along his jawline. To flick that cleft chin with her tongue.

Allie gave herself a shake. “Since we’re the only ones here, it’d be silly to sit apart.”

The look he gave her said he saw right through the excuse, and why not when it was pathetically flimsy? The truth was that this man was magnetic and she suspected she’d be drawn to him even in a room full of people. He waved a hand at the empty place. “Lady’s choice.”

“How magnanimous of you.”

She laughed and headed for the table in the middle of the small patio. There were half a dozen tables, and she picked a spot that put her back to the building and presented the best view of the ocean through a carefully curated gap in the foliage.

He eyed the view and then the chair on the other side of the table, and then he picked it up and set it adjacent to hers so they were sitting on a diagonal,  rather than directly across from each other. “Nice view.”

She turned to agree—and found him staring at her.

Allie wasn’t falsely modest. Life was too short to play games with body shaming and pretending she didn’t have access to a mirror. She was pretty—beautiful when she put some effort into it—but she’d given up being skinny or petite after the agony of high school, and she wasn’t athletically built like some of the women at her gym. Sure, she had muscle beneath her softness, and she could keep up with the best of them in her spin classes, but she loved food just as much as she loved to sweat, and her curves reflected that. Some guys had a problem with that, though she didn’t keep them around as soon as comments like “Should you really be eating that?” started.

This guy looked at her like he wanted to put her on the table and feast on her for dinner.

The desire stoked the flame inside her that had kindled the second she saw him. She leaned forward, checking his left hand. No ring. No tan lines, either. “What brings you to West Island?”

“It’s paradise, isn’t it? Who wouldn’t want to come here to get away from it all?”

That wasn’t quite an answer, but she was distracted by the intoxicating way his mouth moved when he spoke. Get ahold of yourself, Allie. You’re in danger of panting for him. She took a quick drink of water that did nothing to quell the heat rising with each minute she sat next to him.

Luckily, a waiter appeared to save her from saying something truly embarrassing. He outlined the menu for the night and took their drink orders, then disappeared as quickly as he’d come.

They were in the middle of one of the most beautiful places Allie had ever seen, and she couldn’t manage to tear her gaze away from this stranger. She licked her lips, every muscle in her body tensing when he followed the movement. She opened her mouth, but before she could speak, he took her hand, running his thumb over her knuckles.

The touch was innocent enough, but she felt that light movement in places that were most definitely not innocent. She didn’t have to look down to know her nipples now pressed against the thin fabric of her sundress.

His smile was slow and sinful and promised things she never would have had the gall to ask for. “This is going to sound unforgivably forward, but what do you say we get out of here and go back to my villa?”

It was crazy. More than crazy. She didn’t even know his name, and she sure as hell didn’t know anything more pertinent about him.

But there on the softly lit patio with the tropical scent of some flower she didn’t recognize and the soft shushing sound of the tide coming in, she didn’t feel like Allie, gym owner and mother hen, the responsible one who could never afford to do anything out of line or make a misstep because too many lives depended on her.

Here, she was just Allie, a woman. A woman who desperately wanted the man staring at her mouth as if he was doing everything in his power to keep from kissing her right then and there. She licked her lips again, secretly delighting in the way a muscle in his jaw jumped. “Yes.” 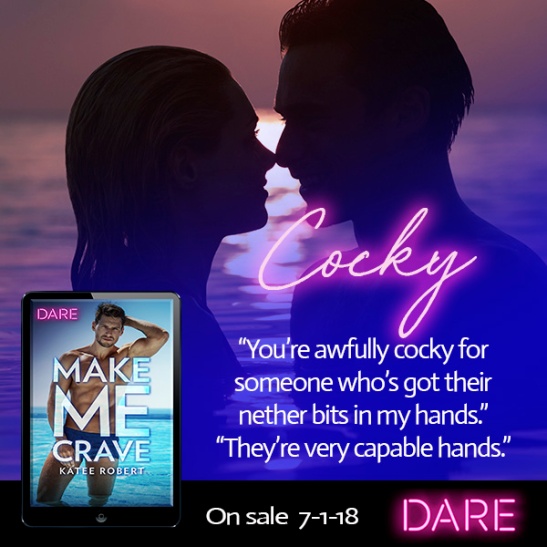 New York Times and USA TODAY bestselling author Katee Robert learned to tell her stories at her grandpa’s knee. Her 2015 title, The Marriage Contract, was a RITA finalist, and RT Book Reviews named it ‘a compulsively readable book with just the right amount of suspense and tension.”  When not writing sexy contemporary and romantic suspense, she spends her time playing imaginary games with her children, driving her husband batty with what-if questions, and planning for the inevitable zombie apocalypse.

Many thanks to Barclay Publicity for the contents of this post and organising the blitz associated with it. I will be posting my review for this enthralling book as part of the blog tour on July 2nd, 2018.

One comment on “Pre-Order Alert: Make Me Crave by Katee Robert”