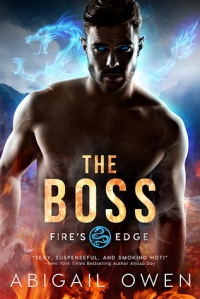 The Dragon shifters are divided into clans by their colour but teams consisting of members from different clans work together as enforcers to ensure other dragons aren’t breaking laws or going rogue and starting fires. One such team, Fire’s Edge, is led by Finn Conleth and when they investigate a nearby fire they discover Delaney Hamilton endeavouring to put out the flames with a hose pipe. The young lady chooses to speak to Finn about her worries about fires and a stalker . . . and the adventure begins!

This is a fast paced story, where clans, teams and a rogue all have significant roles to play. I enjoyed the world building in this story and the well developed characters. The difficulties dragons have finding a mate are explained and the dangers of trying to change the wrong mate are fatal to the woman concerned. It is a different take on dragon shifter stories and I enjoyed escaping into it. This is the first story in a new series featuring Dragon shifters – though there is a free prequel currently available, The Mate. I haven’t read that yet because I only discovered it when endeavouring to post my review, but I have downloaded a copy ready to read! I’m looking forward to reading the prequel and will definitely be looking out for other books in this series in future!

I requested and was given a copy of this book, via NetGalley. This is my honest review of the book after choosing to read it.

Finn Conleth leads his team of enforcer dragon shifters with an iron fist and a cold heart. Every dragon seeks his destined mate, but the process to turn the woman he once thought was his killed her and devastated him. He will never risk his heart again. His team is his family now. When his body eventually gives out, he’ll leave, living his last days alone.

Delaney Hamilton moved across the country to escape the freak fires that plague her. But when another suspicious fire erupts and rapidly escalates around her, her hopes for a new life go up in smoke. She has no choice but to turn to the mysterious men who come to her aid.

Finn knows the fire is dragon-caused, which puts Delaney’s problems directly in his jurisdiction. No matter how her wounded grey eyes call to every part of him, he refuses to risk her life in the mating process.

Until another dragon threatens to claim Delaney for his own, and Finn has to sacrifice everything to keep her alive…