Song of the Soul by Lisa Kessler #Review #Series #MuseChronicles 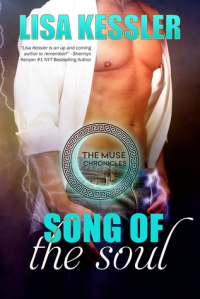 Title: Song of the Soul

What a moving conclusion to this enthralling series this proved to be! It is a delightful mix of Greek Mythology and the nine Muses in a contemporary setting, with the Muses endeavouring to open the Theatre of the Muses despite the efforts of the Order of the Titans striving to thwart their endeavours. It is an intriguing story as Mikolas Leandros has been working undercover with the Order of the Titans, becoming their leader, but he’s really a Guardian, someone chosen to protect one of the Muses. He’s assumed that his Muse was the Muse of Astronomy, one of the two who the Order have murdered despite his efforts to prevent them doing so. However, he’s wrong – the Muse he’s destined to protect is Trinity, the Muse of Music. However, she has no reason to trust him and every reason to distrust him.. . . . Can they find a way to work together to prevent Kronos destroying mankind?

In this story the theatre is almost ready to be opened but Kronos is on the loose and he has company from one of the Titans. Mikolas has to convince Trinity, the other Muses and their Guardians that he really is on their side, whilst Ted Belkin has to decide just which side he is on. . . . .Get ready for the gods, titans, Muses and their guardians to be involved in an action-packed, enthralling race against time to save the world from the vengeance of Kronos. Can Zeus really stop his father from killing all the humans? Can the other gods work with him and the guardians to end the seemingly never ending conflict within the family of the gods and save humanity?

I really think you need to have read the other books in the series to truly appreciate this one, but they’re all riveting reads that I’ve thoroughly enjoyed reading so it might be that I’m biased! This is a story of love conquering even godlike powers, learning to trust and giving of your best to benefit everyone. It is an emotive story of second chances, changing for the better and recognising when you’ve been misled and betrayed. It is a story of believing fate has a plan, there is a destiny to work towards, and there’s even a surprise for one of the older Muses at the theatre opening to reinforce this. It is another real page turner from this master storyteller. Lisa Kessler brings the scenarios and characters vividly to life in the imagination of her readers, taking them with her on this captivating adventure that is resolved brilliantly in the end. So sorry this series has come to an end but looking forward to starting any future one from this highly talented author.

I requested and was gifted a copy of this book without obligation and this is my review after choosing to read it.

His destiny is tied to hers…

Mikolas Leandros carries the Guardian’s mark, and has been working behind enemy lines trying to protect the Muses from the Order of the Titans. The moment he lays eyes on Trinity Porter, the Muse of Music, a power awakens inside of him, a primal need to protect her.

Trinity has lost two of her Muse sisters to the Order of the Titans, and just because the sexy Greek billionaire claims to be her Guardian doesn’t mean she can trust him.

With Kronos on the loose, the stakes couldn’t be higher as Trinity and her sisters open the legendary Theater of the Muses. But the longer Mikolas works at Trinity’s side, the more he comes to realize that love is the only thing worth fighting for, and in the end, love could save them all.

Other books in the series:

(Click on the titles to view my reviews of each book)

Light of the Spirit #4

Dance of the Heart #6

This entry was posted on November 26, 2018 by Splashes Into Books in Adult and tagged 5*, Adult, Adventure, Breath of Passion, Contemporary, Dance of the Heart, Devoted to Destiny, Fantasy, Greek muses, Greek mythology, Legend of Love, Life and Living, Light of the Spirit, Lisa's Lair, Lure of Obsession, Muse Chronicles, Mystery, Paranormal, Paranormal Romance, Romance, Series, Song of the Soul, suspense, The Muse Chronicles.