Interview with Penny Ingham, author of The Saxon Wolves.

I am very pleased to share with you Penny Ingham’s answers to my questions in this special post today! Read on to discover what she said and to discover more about her book, ‘The Saxon Wolves’ . . . .

The Saxon Wolves was inspired by a series of spectacular archaeological discoveries which are beginning to shed light on the so-called Dark Ages: The dazzling treasures of the Sutton Hoo ship burial, the mysterious Tamworth hoard and most recently, the excavations at Tintagel, Cornwall.

In the novel, Anya falls in love with Silvanus, whose stronghold perches on the clifftop at Tintagel.  Tintagel has long been associated with the legendary King Arthur and while we will probably never know for certain if Arthur actually existed, the recent archaeological excavations have proved there was a thriving, high status fortress on the clifftop during the fifth century, the exact time a real Arthur would have been fighting the invading Saxons.

Tintagel might seem isolated and ‘cut off’ to us today, but in the fifth century, the sea was the motorway of its day, connecting Cornwall to the trading routes of the Mediterranean and the Byzantine world. The people of Dumnonia (Cornwall) sold their tin in exchange for the luxury goods, amphorae of olive oil, wine, fine pottery and glassware, all of which have been found at Tintagel during the excavations. It was these finds which helped me build a picture of what life might have been like in Silvanus’s stronghold.

I write historical novels, so research plays a huge part in my writing process.  I visited all the historic sites featured in The Saxon Wolves and took many, many photos. I pored over artefacts in museums to get a feel for the material culture.   I also read avidly, until I felt comfortable in the period – until I could walk through its streets or stroll through its country lanes, and see and hear and smell everything clearly in my mind’s eye.

I am a ‘plotter’, not a ‘panster’.  I plan, chapter by chapter, and I create a bio for every character – their appearance, their background, their strengths and weaknesses, their interests, their individual quirks. Even so, it often takes several drafts before I’m even remotely happy with a novel.

I need peace and quiet to write, so will often work either very early in the morning or late in the evening, when the house is at its quietest. When I’m writing I can become so engrossed, I sometimes forget to eat or drink. My study becomes messier and messier, gradually disappearing under heaps of reference books, lever arch files, A4 pads, and copious sticky notes.

I use paper and pen to take notes whilst I’m researching, but once I begin the writing process, I write straight onto the computer.

Silvanus is heir to the throne of Dumnonia, modern day Cornwall. His father, Etar, is a great and wise king, but he is now old and dying, and soon Silvanus will have to take his place on the throne. Silvanus is a great warrior. He’s charismatic and popular with his men and his people, but he is severely lacking in self-confidence. He is in awe of his father’s achievements and he doesn’t believe he can ever live up to them. His low self-esteem tortures him, and when he’s battling his demons, he can be moody and withdrawn. His life is further complicated when he falls in love with Anya, against his father’s wishes, and against the wishes of his people, for Anya is a Saxon and viewed by many as the enemy. I loved writing about how Silvanus grapples with the agonising choices of divided loyalties, and how Anya’s influence helps him overcome his demons as the novel progresses.

I would choose to be Anya. As the daughter of the high king of Saxony (modern day northern Germany), and a Druid priestess, she enjoys both wealth and privilege, until she is exiled and loses everything.  She sails to Britannia, a foreign land rapidly sinking into chaos and war. Somehow, she has to find a way to survive. When I began writing The Saxon Wolves, I knew I didn’t want Anya to rely solely on her feminine wiles, her sex appeal.

She is principled, brave and feisty, with great strength of character. She is a gifted healer.  She is highly intelligent, and she has great empathy. Because she is the daughter of a high king, she understands politics; how the world works. And it is these skills she uses to survive.

The name Anya is of Slavic/Russian origin, meaning goodness or grace, which seemed appropriate for my protagonist – and I also love the name!  Silvanus is named after a Celtic god of the woods and fields. Silvanus’s kingdom escaped the urbanisation of the Roman occupation. It is isolated, rural and unspoilt, so it seemed a fitting choice. The quasi-historical figures of Vortigern, Hengist and Horsa are all mentioned in the surviving records of the time.

Thank you so much for answering my questions! 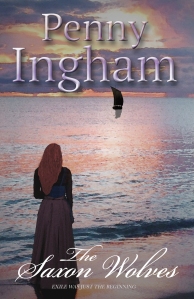 Synopsis of ‘The Saxon Wolves’

Britain 455AD. The Roman Empire has fallen. As the daughter of a king and a priestess of the sacred grove, Anya’s life in Germania is one of wealth and privilege – until she dares to speak out against the high priest’s barbaric human sacrifices. Her punishment is exile. Forced to leave her homeland, she sails to Britannia, to an island that is sliding into chaos and war, as rival kingdoms vie for power. Alone and far from home, Anya must learn to survive amidst the bloodshed, treachery and intrigue of fifth century Britain. Can she find a place to belong – a home, a hearth, a welcome?

Penny’s father, a journalist, instilled her with a love of history from an early age. Family holidays invariably included an invigorating walk up an Iron Age hill-fort whilst listening to his stirring stories of the Roman attack and the valiant defence by the Britons. Consequently, Penny has a degree in Classics and a passion for history and archaeology. She has enjoyed a varied career, including BBC production assistant, theatre PR and journalism, but her ambition was always to write historical fiction. Her first novel, The King’s Daughter, was awarded Editor’s Choice by the Historical Novel Society. Penny has worked on many archaeological excavations, and these ‘digs’ and their evocative finds often provide the inspiration for her books. Penny’s research also takes her to the many spectacular historical sites featured in this novel, including Hadrian’s Wall and Tintagel.

This entry was posted on March 22, 2019 by Splashes Into Books in Adult and tagged Adult, Adventure, Author Interview, Historical, Life and Living, Penny Ingham, Roman, Romance, suspense, The Saxon Wolves.