Interview with Linden Forster, author of The Greenmen

A real treat for you all today, an interview with Linden Forster!

Read on to find out how he answered my questions and discover more about him and his book, The Greenmen.

It started at the back of an English lesson when I was seventeen when I was playing around with words in my head and realised that if you took “buoyancy” and “float” you could make “boat” and thought wouldn’t it be fun if instead of “boat” it got named “floyancy” instead. I started thinking about what sort of people would invent the world’s first boat and for what reasons and the idea grew from there.

Well I don’t know if I can call it a process as I have only written one story and not even that is finished yet (although it is at present two and a half books long), but after I came up with the idea for The Hero’s Arc, I wrote the first couple of chapters for the first in the series, Divine Invention, and then I went to University to study Marine Biology. I still thought about the book while I did my degree and took notes, but I didn’t write anymore. After I graduated, I wasn’t sure what I wanted to do next, so I did a course in creative writing and loved it. While doing the course I wrote the rest of Divine Invention in four months and then after a couple rounds of editing, wrote it’s sequel in six. I’ve since gone back to both and edited them further and now I’m writing the third. I’m not sure that answers your question, but that is how I have written my books so far.

I wrote Divine Invention and The Greenmen entirely on the computer, with book three I am branching out a little and doing it about half and half.

Queen Arburella. She is the smartest, best dressed and most diabolical of everyone. She is peerless and a corrupting force, but appreciates usefulness when she sees it.

It’s a pretty random process. I think a name can help give a little bit of an idea of a character, but I also think it’s better to let their character come out on the page through their decisions and actions so I don’t stress over names a great deal. Sometimes I will read back over name and realise it is not right and I will give it another go.

Probably Captain Morj, although, I relate mostly to Aereon so I think I am most like him. He came to life as an outlet for me to talk about some of my struggles and frustrations. I hope he gets a happy ending.

Thank you so much for answering my questions!

Now discover more about his book, The Greenmen 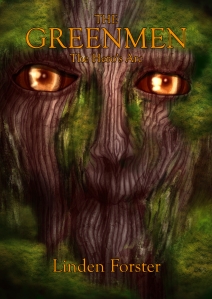 Aereon has found the Creators.

He’s crossed seas and mountain ranges to reach them, tangled with dwarves and ogres along the way, escaped the clutches of an icicle-wielding irate yeti to rescue them and now they tell him that they weren’t in any great need of help.

A revolution has sparked in the realm of Hudikvar, because of something things Aereon might have said to a troop of homeless youths. Now, King Victarian is after Aereon and anyone associated with him.

Local woodsman, Lars, has agreed to help them flee and be their guide through Oak’s Wood, but even he cannot guess what lies in wait for them within. Not now the Lord of the Primes is about to wake.

‘He’s got a touch of destiny about him, that one,’ said the Dealer.

‘And she’s ordered the lobster,’ said the Teller.

Linden Forster began writing at the age of seventeen. Divine Invention was his debut novel and it took seven years from the idea conjuring at the back of an English class to reaching the page.

Since then, writing has become his dream and passion. The Greenmen is the second in his fantasy series, The Hero’s Arc.

He is a lover of nature and enjoys walks in the country and often ventures out armed with a notepad and pen.

Many thanks to Linden Forster for answering my questions and to Rachel’s Random Resources for providing materials for this post and organising the tour it is part of.

One comment on “Interview with Linden Forster, author of The Greenmen”