This is such a timely release – get ready for shocks, surprises and more in this dystopian story set in an isolationist post-Brexit UK . . . .

Sixteen-year-old Bex Ellman has been drafted into an army she doesn’t support and a cause she doesn’t believe in. Her plan is to keep her head down, and keep herself and her friends safe – until she witnesses an atrocity she can’t ignore, and a government conspiracy that threatens lives all over the UK. With her loyalties challenged, Bex must decide who to fight for – and who to leave behind.

The Battle Ground series is set in a dystopian near-future UK, after Brexit and Scottish independence.

Press Release about this book:

Battle Ground: a post-Brexit YA dystopia

What would an isolationist post-Brexit UK be like to live in? That’s the question posed by a new Young Adult novel, Battle Ground, published on July 25th by Taller Books.

Battle Ground follows sixteen-year-old Bex Ellman as she is drafted into an army she doesn’t support and a cause she doesn’t believe in. Her plan is to keep her head down, and keep herself and her friends safe – until she witnesses an atrocity she can’t ignore, and a government conspiracy that threatens lives all over the UK. With her loyalties challenged, Bex must decide who to fight for – and who to leave behind.

Author Rachel Churcher extrapolates the arguments and debates surrounding our exit from the EU, and presents a dystopian near-future view of the country. In Battle Ground, Brexit leads to Scottish Independence, and to civil unrest. In an effort to protect the population, the government introduces strict anti-terrorism laws, and creates a branch of the Army dedicated to public safety. Sixteen-year-olds are conscripted into the Recruit Training Service to be a visible armed presence at events and on the streets.

In an echo of recent events in Sudan, the civilian internet is disabled, and mobile phone networks are switched off. Eventually the army is given emergency powers, and the right to vote is suspended. The slide into totalitarian isolationism is described in flashbacks, while Bex and her friends resign themselves to lives of military training and armed patrols.

As one of the characters explains, these measures were never imposed on the population. People voted for safety at the cost of their democratic rights. “The government made sure the people were entertained, and most of them didn’t even notice the changes, until one day they woke up and they couldn’t vote.”

For the author, a background in human geography and a lifelong love of Science Fiction meant that an extrapolation of the arguments over Brexit was the obvious way to work through her frustration with the campaign, with voter apathy, and with the decision to leave.

“I believe we are stronger in partnership with our neighbours, and like many Remainers, I didn’t see Brexit coming. It made me think about what else we could end up endorsing, and allowing, in this country.  Government propaganda, outright lies, and an assumption that a Remain majority was guaranteed all contributed to the Brexit victory. I don’t want that to happen again, and I hope that Battle Ground will act as what David Brin calls a ‘self-preventing prophecy’. I want readers to think about what they will allow their governments to do, and how they might influence future decisions. I want the Battle Ground series to be a wake-up call to anyone who thinks that they can’t change things by voting.”

Battle Ground will be launched at YALC, the London Young Adult Literary Convention, on July 25th. 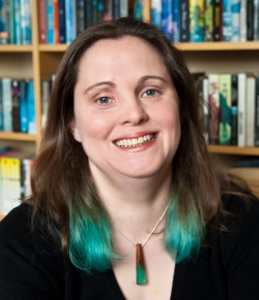 Rachel Churcher was born between the last manned moon landing, and the first orbital Space Shuttle mission. She remembers watching the launch of STS-1, and falling in love with space flight, at the age of five. She fell in love with science fiction shortly after that, and in her teens she discovered dystopian fiction. In an effort to find out what she wanted to do with her life, she collected degrees and other qualifications in Geography, Science Fiction Studies, Architectural Technology, Childminding, and Writing for Radio.

She has worked as an editor on national and in-house magazines; as an IT trainer; and as a freelance writer and artist. She has renovated several properties, and has plenty of horror stories to tell about dangerous electrics and nightmare plumbers. She enjoys reading, travelling, stargazing, and eating good food with good friends – but nothing makes her as happy as writing fiction.

Her first published short story appeared in an anthology in 2014, and the Battle Ground series is her first long-form work. Rachel lives in East Anglia, in a house with a large library and a conservatory full of house plants. She would love to live on Mars, but only if she’s allowed to bring her books.

Many thanks to Rachel’s Random Resources for providing materials for this post and organising the tour it is part of.