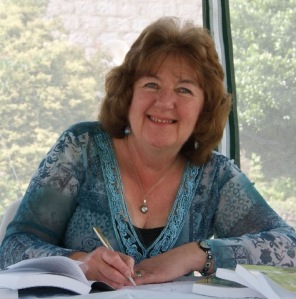 Nancy Jardine, author of the Celtic Fervour series, has kindly agreed to answer my questions and I’m about to share her responses with you! Keep reading to discover more about her, what she said, information about her latest book in the series and to enter the giveaway with a chance to win yourself a copy of this book!

I loved teaching all periods of history to my upper primary classes, but especially loved investigating the era of the Ancient Roman Invasions of Northern Britain and Scotland. The idea for Book 1 The Beltane Choice was sparked by learning that the ancient Late Iron Age Tribes of North Britain (present day Cumbria, Yorkshire & Northumberland) faced the hugely impressive fighting machine that was the Ancient Roman Army. The only way any of those tribes could hope to survive pitched battles against the Romans, and preserve some of their cultural identity, was to band together. Book 1 of the Celtic Fervour Series unites the Selgovae (southern Scotland) and the Brigante (Cumbria/Yorkshire England) tribes prior to massive Roman invasion. My Garrigill clan saga developed into a series after a reviewer of Book 1 asked when Book 2 was coming out

Lots of initial research is done before I make a plan for the novel. In the Celtic Fervour Series, research done for earlier books is revisited and new research is done, where necessary, for later books. I’m more pantser writer than plotter, but I make a broad outline of where I want the plot and characters to be at certain stages of the story though this regularly changes as the writing builds up. For my historical timelines, and family tree structures in my contemporary mysteries, I pencil them out on a large piece of wall lining paper which allows plenty of space for added detail as the story progresses. I constantly draft and redraft since I’m not able to write every day. I do a lot of self-editing before sending the manuscript to a professional editor. I was first published with small independent publishers; then a hybrid when I self-published my time-travel historical in 2015. But since late 2018, I’m completely self-published with Ocelot Press, a co-operative of authors. I currently pay for professional editing and front cover designs but do the formatting myself for my paperback and ebook versions.

If I’m over at my daughter’s house grandkid minding, I use my laptop keyboard. When home, I use my keyboard that’s linked to my laptop, monitor screen and remote mouse. I carry a small notebook in my handbag but rarely use it when away from home. My pencils are sharpened and ready for when I make my paper plans, timelines and family trees. My A4 desk diary has lots of pencil scribbles added when I feel the urge to make sudden notes.

Tough question. I don’t have definite favourite though I’ve great fondness for Brennus who features in Books 2 & 3 of the Celtic Fervour saga. He lives in an age when body image might not have been the same as today, but anyone being forced to accept huge changes to their capabilities and appearance has a tough time regardless of the era they live in. Making Brennus different physically and mentally from Book 1 was a challenge to write because he’s such a lovely man. Describing the changes to him affected me in ways that haven’t happened when creating other characters.

Probably Ineda who is a survivor (Books 2 & 3). She’s pragmatic and sensible. She’s clued-up and wise beyond her years. Like Brennus she has to adapt to massive changes in her circumstances but her courage remains undimmed.

For my Garrigill clan members, I used on-line dictionaries of Gaelic names to make those characters as authentic sounding as possible, though they’re the ‘anglicised’ versions to make guesses at pronunciation easier. I’ve mostly chosen names which fit a character trait. Ineda means ‘bright fire’ so I made her a sunny yellow-blonde to match up with the bright fire image, but she’s also vibrant, warm and lively. Similarly for my Ancient Roman characters I used a Latin names dictionary and got ideas from historical re-enactment sites like Roma Nova. The name Pomponius – secretary to Tribune Gaius Livanus Valerius in After Whorl: Donning Double Cloaks – derives from the root pompe meaning five. I could have described him as a fifth son, but since he’s a pompous snob I thought the name very apt for him.

Many thanks for your great answers to my questions!

Here’s more information about After Whorl: Donning Double Cloaks, the third book in the Celtic Fervour series….. Then read on to learn more about Nancy Jardine and the chance to enter to try to win a copy of the book for yourself! 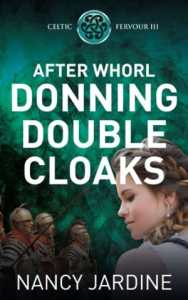 Brennus of Garrigill—Bran—monitors Roman activity across Brigantia. Stability prevails till AD 78 when Agricola, Governor of Britannia, orders complete conquest of all barbarians. Brennus heads north, seeking the Caledon who will lead the northern tribes against Rome.

Ineda treks northwards with her master, Tribune Valerius – supplies officer for Agricola’s Britannia campaigns. At Pinnata Castra, she escapes and seeks fellow Brigantes congregating for battle in the north.

The Legions of the Roman Empire and the Caledon allies clash at Beinn na Ciche in AD 84, but where are Brennus and Ineda?

The adventures of the Garrigill Clan continue…

Nancy Jardine writes historical fiction; time-travel historical adventure; contemporary mystery thrillers; and romantic comedy. She lives in Aberdeenshire, Scotland, where life is never quiet or boring since she regularly child minds her young grandchildren who happen to be her next-door neighbours. Her garden is often creatively managed by them, though she does all the work! Her husband is a fantastic purveyor of coffee and tea…excellent food and wine! (Restorative, of course)

A member of the Historical Novel Society; Scottish Association of Writers; Federation of Writers Scotland; Romantic Novelists’ Association and the Independent Alliance of Authors, her work has achieved finalist status in UK competitions.

One comment on “#Interview with Nancy Jardine, author of Donning Double Cloaks”