The Boy in the Photo by Nicole Trope #Review #Kidnapping #FamilyDrama 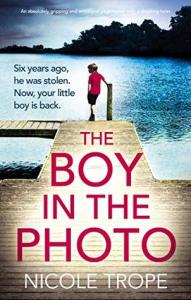 Title: The Boy in the Photo

This is an enthralling, unputdownable psychological thriller and a great read.

Six years ago, six year old Daniel wasn’t at school when his Mum, Megan, went to collect him. He had supposedly been picked up by his father. Megan had divorced her abusive husband after years of being controlled by him and now he won’t answer his phone. Now she has a phone call to say that Daniel has been found. Her twelve year old son is returned to her but so much has changed in the six years apart and Daniel won’t tell her what happened to him . . .

This is a moving story told from both points of view but also sharing what happened in the past as well as the present. As Daniel moves in with his Mum again, she has remarried and he now also has a baby sister. Daniel is reticent to share anything about the intervening years. The struggle they have to reconnect is shared in heartbreaking detail as she strives to get him to trust her again. The story is a page turner with great characters and, although some of it is predictable, there are also some surprising twists to keep you guessing and the Epilogue is a fantastic ending.

I requested and was gifted a copy of this book via NetGalley and this is my honest review after choosing to read it.

She becomes aware of the silence at the other end of the line. A prickling sensation crawls up her arms. Her heart speeds up. ‘Found who?’ she asks, slowly, carefully, deliberately.‘They found Daniel.’

Megan waits at the school gates for her six-year-old son, Daniel. As the playground empties, panic bubbles inside her. Daniel is nowhere to be found.

According to his teacher, Daniel’s father picked up his son. Except he and Megan are no longer together. After years of being controlled by her cruel husband, Megan finally found the courage to divorce him. Hands trembling, she dials his number, but the line is dead.

Megan is feeding her new baby daughter when she gets the call she has dreamt about for years. Daniel has walked into a police station in a remote town just a few miles away.

Megan is overjoyed – her son is finally coming home. She has kept Daniel’s room, with his Cookie Monster poster on the wall and a stack of Lego under the bed, perfect to welcome him back. But when he returns, Daniel is quieter than she remembers…

Desperate to find out what happened to her little boy and to help him heal, Megan tries everything – his favourite chocolate milkshake, a reunion with his best friend, a present for every birthday missed – but still, Daniel is distant.

And as they struggle to connect, Megan begins to suspect that her son is hiding a secret. A secret that could destroy her family…

A heartbreaking, emotional and poignant drama about a family in turmoil. Fans of Jodi Picoult, Liane Moriarty and Linda Green – this moving and stirring novel is for you.

This entry was posted on December 31, 2019 by Splashes Into Books in Adult and tagged 4.5*, Adult, Bookouture, Contemporary, Detective, family drama, Life and Living, Mystery, Nicole Trope, suspense, The Boy in the Photo.