When former Olympic Swimmer, Michael Adams—now Canada’s hottest reality TV star— insults his fake showbiz wife on social media, he escapes the ensuing scandal and jumps on the first flight to Australia. Desperate to experience ordinary life again—if only for a few weeks—he becomes “Adam”, just another tourist traveling through the Outback. But with a reward out for his safe return and his fame’s nasty habit of catching up with him when he least expects, he needs a better disguise… and he’s just found it.

Sweet and scruffy British backpacker, Evie Blake, is taking a year out of her busy London life. Tired of lies and liars, she’s looking for adventure to heal her broken heart. So when the hot Canadian she meets at the campground offers to be her travel partner through Western Australia’s wild Kimberley region, she grabs the chance, unaware he’s got the world out looking for him.

This is a story where dissatisfaction, rebellion and escapism lead to a sweet but fraught romance.

Michael Adams was a gold medal winning Olympic swimmer but when that career ended he wasn’t sure what to do with his life. He allowed his father and his business manager to guide him so much that he even married his showbiz wife who he really doesn’t like! When he starts to question his naivety in making those choices he eventually rebels by flying to Australia where he becomes ‘Adam’, a truck driving tourist exploring the Outback. That’s where he meets backpacker Evie Blake. She’s from London but is spending a year down under. As the two set out to explore the Kimberley region together, he’s keeping his true identity secret. That shouldn’t be a problem, should it? But when love, fate, an amazing rescue and his wife are involved nothing is going to be straightforward for them!

This is a heartwarming romance, with the heat turned up in the Australian Outback. It is a story where running from your past, hiding secrets from those you’re growing close to and deciding to make a stand for yourself all have key parts to play. The story flows beautifully, there are characters to love and others you’ll definitely not like! It was a highly entertaining read – complete with an epilogue from six years later that made a brilliant finale.

I requested and was gifted a copy of this book and this is my honest review after choosing to read it. 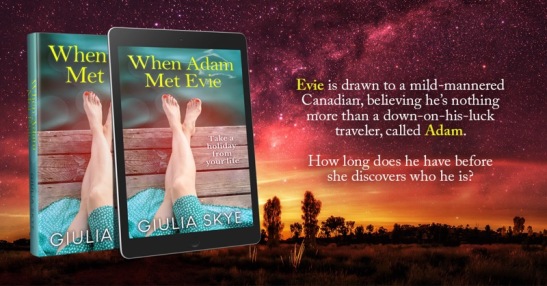 Italian-born Giulia Skye spent her childhood watching classic Hollywood films and thinking up her own romantic stories. After two decades working in TV production, she knew turning those stories into novels would be much more enjoyable – and far cheaper – than turning them into films. She still keeps her hand in TV production but is at her happiest being a stay-at-home mum, spending time with her family, growing her own vegetables and conjuring up sizzling stories about sexy heroes meeting fiesty heroines who aren’t always as they at first appear.  When Adam Met Evie is her first novel, Book 1 of her “Take a Holiday” series.