The Magnolia Sisters by Alys Murray ###

This is a fantastic contemporary romance with great characters who totally grow on you as the story progresses.

The Magnolia Sisters are Harper, Rose and May Anderson. They live with their parents on their family flower farm, each having different roles in the business. Harper is the one who oversees the actual farm work and she’s not amused when an out of towner, Luke Martin, suggests he hires the farm as a venue for his sister’s wedding. What makes this worse is his sister’s fiancé is the man who broke the heart of Harper’s sister, May. Luke is a self-made multi-millionaire tech mogul and is determined to get his sister, Annie, the venue she wants.. . . . . He’s usually successful, but then again, he’s never been up against someone like Harper before!

The sparks fly between Harper and Luke in this family drama. There are plenty of twists and turns in the story but family is at the heart of it all. There are superb descriptions of the flowers and farm, the scenic setting is brought to life by the author’s poetic prose. The potential heartbreak of having to choose to looking out for yourself or your family is beautifully portrayed as the two fight their mutual attraction. It is a fun, sweet romance which takes you through the full gamut of emotions as the drama unfolds. It is a great read and I have no hesitation in highly recommending it to anyone who enjoys contemporary enemies to friends to romance stories. I suspect this is the start of a new series and I am certainly looking forward to reading more about both these families in future. I wonder what Stella will get up to next?

I requested and was gifted a copy of this book via NetGalley and this is my honest review after choosing to read it and thoroughly enjoying it.

Harper Anderson has a to-do list longer than the Colorado river, and fields of tulips to tend to at her family’s flower farm in Hillsboro County, California. It’s her dream to run the business with her sisters when their father retires, keeping up traditions that began with her great-great-grandmother.

That is, if there’s a farm left to run. Rich out-of-towners looking for a slice of country living are hiking up the prices in town and it’s putting her family out of business. So she has no time for the arrogant LA tech mogul who makes her an offer to use their farm as his sister’s wedding venue. No amount of money could make up for the destruction it would wreak on next season’s crop. The sooner Luke Martin is on his way, the better.

But Luke isn’t willing to go. He’s been looking out for his sister ever since their deadbeat parents left them to fend for themselves, and he’ll do whatever it takes to make her happy. So when Harper’s newest farmhand leaves her in the lurch, he sees an opportunity to strike a deal. He’ll work on the farm for free if she’ll give him the chance to change her mind.

Harper and Luke each expect the other to crack first. What they don’t expect is the chemistry that sparks between them as they work side by side among the budding roses. But Luke’s presence is turning over more than the earth, and just as Harper is starting to let her guard down, he stumbles upon a secret that could spell disaster for the entire Anderson clan.

With her family’s happiness at stake, can Harper put her trust in a man who is worlds apart from everything she knows?

An emotional, spellbinding story about family, first impressions and the transformative power of love. Fans of Susan Mallery, Debbie Macomber and Carolyn Brown will be carried away by The Magnolia Sisters. 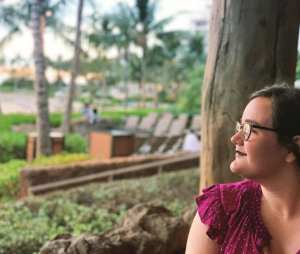 Alys Murray is an author who writes for the romantic in all of us. Though she graduated with a degree in Drama from NYU’s Tisch School of the Arts and a Master’s in Film Studies from King’s College London, her irrepressible love of romance led her to a career as an author, and she couldn’t be happier to write these stories!

Her debut novel, The Christmas Company, was the first original Christmas novel published by Hallmark, and it is currently optioned for a future Hallmark Christmas movie. Additionally, Alys pens screenplays for Lifetime. You can see her work most recently in 2019’s Christmas in Louisiana, starring Jana Kramer, Percy Daggs III, Moira Kelly, Dee Wallace, and Barry Bostwick.

Alys loves connecting with readers, so if you want to get in touch, you can find her at http://www.alysmurray.com or on twitter at @writeralys.

She enjoys kissing books, Star Wars, and reminding people that Michael Bay has two movies in the Criterion Collection. Tobey Maguire is her Spider-Man.

3 comments on “The Magnolia Sisters by Alys Murray ###”