I’ve a treat for you today, courtesy of K.T. Findlay. He has kindly chosen an extract from his book for me to share with you today. Read on to find out more about him and his book as well as to read the extract he has selected…. 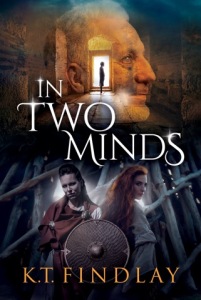 Hurled twelve hundred years into the past, into someone else’s body, things could hardly be worse. And then the body’s owner wanted it back…

Museum curator Thomas and ten year old Anglo Saxon Wulfstan have to cope with a fifty year age gap, a huge culture clash and never knowing from one moment to the next who’s going to be in control.

As they’re trying to come to terms with it all, they inadvertently antagonise Wulfstan’s father, King Offa of Mercia. The King is already frustrated with his son’s “late” development and issues the boy a challenge. Wulfstan is given just a year to find and train ten slaves who can beat the King’s own champions in a fight to the death, but there’s a twist.

When his son accepts the challenge, Offa turns the screws to make him back down and limits him to females only. In the brute strength world of Anglo Saxon battle they surely haven’t a chance, but Thomas convinces Wulfstan that if they can find the right people, a few new ideas and enough practice might just give those women the tools to become the heroes Wulfstan so desperately needs.

K.T. Findlay has chosen this extract from In Two Minds for me to share with you today

K.T. Findlay: I chose this particular extract for Splashesintobooks because of the independence of thought in the website.

The extract takes place in the palace, with Wulfstan exploring his new out of body powers. At great expense, he and Thomas have been equipping their team in the palace market and sending the bills to the King…

Meanwhile, Wulfstan had left the market and was hovering in the King’s chamber when the first of the bills arrived, carried by a steward. Offa’s eyebrows rose a little when he was told the amount, but he paid up without a murmur.

He was less sanguine about the second, and by the time the tenth, eleventh and twelfth had made their appearance, he was incandescent. They were for the fourteen finest horses in the market. An astronomical cost!

‘Bring that wretched brat to me this instant!!’ he roared.

‘What’s the matter dear?’ asked the Queen, who had just walked into the hall.

‘Your son is spending gold and silver as if it’s water!!! And he’s sending me the bills!! How dare he mislead the merchants in this way?!? How dare he assume I’ll pay for his latest games?!?!’

The Queen cocked her head to the right, her eyes twinkling. ‘Are the bills for things to equip him and the girls?’

Offa paused in mid rant. ‘Yes! So what?’

‘Well you can hardly complain dear. You told him you would not only buy whatever girls he wanted, but would also pay to equip and train them. You placed no conditions on that, but you did put him in a position where he will almost certainly lose. So, you can hardly blame him for getting the best he can find.’

Offa looked angrily into her still twinkling eyes. His glare would have terrified any other person in the land, but she knew her man, and fearsome monarch though he was, she knew he loved her above all else and would never harm her. More than that, he trusted her judgement. It helped him to keep his balance.

Finally, his face broke into a laugh. ‘Alright Cynethryth! You’re right. What does it matter? There’s plenty of gold after all. Let him have his trinkets. But I’ll make him eat humble pie when he caves in and begs pardon for his stupid pig headedness.’

The twinkles continued. ‘Oh I don’t think he’ll cave in dear. I believe he has every intention of winning the bet, and surviving. That knock on the head has changed him more than you could ever guess. He’s all grown up now, a man in mind, intelligent, wise, and determined. I think he’s going to win.’

‘You didn’t see him last night before the feast. He was strong and firm in ordering the treatment he received. He treated Hengist with deep compassion, love and support, as one best friend to another. Not only that, he was wise in his words and actions. He even wormed his way into Ravena’s affections, and you know what she really thought of him up to yesterday! You’re too hard on him. He’s always been a bright, intelligent, and loving child, but now he’s become someone you’ll be proud to call your son.’

Offa’s jaw continued to hang open. Collecting himself he asked ‘So, do you think I need to rescind Hengist’s punishment? Take back my bet with Wulfstan?’

It was Cynethryth’s turn to think. She turned away and looked into the flames of the fire. ‘I don’t see how you can do either of those things, even though I would wish that you would. To rescind Hengist’s punishment would probably make Grimketil think he can strike Wulfstan and get away with it. Wulfstan really pushed him last night. Grimketil lost a lot of face, two of his favourite girls, and he’s very angry about it all. And since having his morning beer, he’s been in an even worse mood, wandering about trying all the barrels he can find, even your special ones. I have no idea what that’s all about, but he was swearing under his breath the whole time.’

‘Secondly, I don’t think you can call off your bet without making it look as if you made a foolish mistake last night. Jaenberht would revel in that at the next synod when he wants to manipulate you.’

Offa came up behind her, and put his arms around her, clasping his hands gently but firmly over her tummy. He pulled her lovingly into his chest, and dropped his face into her hair. She smiled, and stroked the back of his hands. For a full minute they stayed together, her scent filling his world, as he mulled things through. He kissed the top of her head, and gently turned her to face him. ‘So what do you think I should do?’

She kissed his cheek. ‘Give him your full support. Buy him what he asks for. And encourage him. Don’t belittle him again, especially not in public. And just maybe, once in a while, you might tell him you love him. I know you love him, but you’ve never told him, nor shown it in any other way, and I don’t think he knows.’

Their eyes rested together, a few inches apart. Ever so slightly, he nodded. Then they kissed. For a long time.

For an instant fear and jealousy ripped through him. ‘He doesn’t love me! He loves Thomas, and what Thomas is!!’ And then he remembered his mother’s words “I know you love him…” and knew his fear was groundless. Then regretfully, but respectfully, he left them, to go back to the marketplace.

Wow, thank you!  I don’t know about anyone else, but that extract has me really interested in reading this book.Thank you for selecting it, KT Findlay! 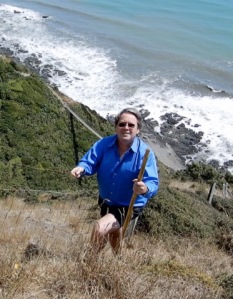 ​K.T. Findlay lives on a small farm where he dovetails his writing with fighting the blackberry and convincing the quadbike that killing its rider isn’t a vital part of its job description.

Many thanks to Rachel’s Random Resources for providing materials for this post and organising the tour it is part of.

One comment on “In Two Minds by K.T. Findlay #Excerpt #Spotlight #BlogTour”