#GuestPost by Robert J Fanshawe, author of A Cellist Soldier

I’m pleased to welcome author Robert J Fanshawe here today. He has kindly written a guest post sharing information about the main protagonist in his book A Cellist Soldier. Read on to discover what he has revealed and look out for his favourite aspects which he’s highlighted in italics!

The main protagonist in A Cellist Soldier is Marcus Harris (Nick-named Cello) the actual cello-playing soldier.

He is not cut out to be a soldier. He is a cello player and might make a great one. As with all musicians when young they must practice very diligently to master their chosen instrument early so that their career can progress to great heights. We see flashes and references to this in descriptions of Marcus’s childhood where no doubt his parents, his mother was a musician also; would have made sacrifices for him to play and practice.

The family suffered a tragedy when Marcus’s younger brother was drowned some years before the war. Although not covered in detail this obviously affected him deeply.

He is a reserved and intense young man, who does not demonstrate emotions easily. For instance he does not put kisses on the letter to his mother when he asks for her to send his Cello.

His focus is on music which he sees as the saviour of the world. He imagines all the soldiers replacing their weapons for cellos and making a gigantic fart against the war. This focus on his art is my favourite thing about him. It does not waver right until the end.

But he understands the needs of the war and the values that it engenders, particularly of compassion and sympathy and the need to look after fellow soldiers, especially when they become casualties. This value does not break down as it does in other men. This is also one of my favourite things about him

He carries his casualty across No Man’s Land alone showing that despite the accusation that  he knows nothing about the realities of being a soldier his tough resilience in this is evident.

On returning to face the consequences of his action he shows great fortitude and independence. But there is a final emotional break-down which demonstrates his frailty at the end. His music and art maintains his strength but in the end it cannot defeat the system.

Many thanks for this insight into your main character and especially for sharing your favourite aspects!

Read on to discover more about Robert J Fanshawe and A Cellist Soldier: 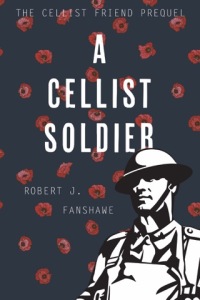 A British Battalion moves up ready for the World War One 1917 battle of Arras. A much loved Regimental Sergeant Major is blown up, the man taking his place intensely disliked. A patrol is sent into No Man’s Land to rescue a casualty crying for help.

One soldier, a cello player, throws his rifle away when the wrong casualty is shot in frustration. Threatened with Court Martial, he walks alone to find the real one, imagining playing his cello. He finds him, legs impossibly injured, pulls him from the mud and carries him towards a German medical station.

The casualty, Sergeant John Wall, a real soldier shot for desertion in 1917, dies and the cello player is taken prisoner. He runs from the medical station wearing a red cross apron. On returning to his own line he is arrested.

Witness a flawed Court Martial and a bizarre final ‘victory’ which is to have a profound effect on Ben the cellist’s friend and the fundamental question of justice in war.

As a writer you never accept things as they are. You always ask, why is this and what is my part in it?

I chose this ‘strapline’ for my facebook profile as it encapsulates my philosophy as a writer; to be curious and questioning over everything. Certain passions guide and direct my writing. For those I chose another principle;

Live (and write) by what is in your heart.

So my writing, all of it, comes from the heart, as all art must. Otherwise how can it be truth?

One of my passions is war and conflict, its sufferings and injustices, its contradictions and the nature of mankind that accepts it. I spent thirty-two years in the British Royal Marines. Early on I was fortunate to read Remarque’s novel All Quiet on the Western Front, one of the greatest war novels. Having an uncle killed in 1917 and the poetry of the war, contrived to set my goal of writing about WW1. But it wasn’t until the centenary of the war that I found my voice, despite writing much in the intervening years. My initial work was a play; All About the Boys, the last days of Wilfred Owen. This was performed in 2014/16 and published in 2018. After that I embarked on another play; The Cellist. Afterwards I realised that story of the Cellist’s friend would make a novel. I had always wanted to write novels so I wrote The Cellist’s Friend. It was published in 2018. Then I went back to the play about the cellist and wrote it as a novel and prequel calling it; A Cellist Soldier and this is my latest work.

I have also written another two plays, so far not staged and as a member of a SE London arts group, Global Fusion Music and Arts, I have written other multi-media pieces for stage, one of which, A Tribute to Martin Luther King, was performed at The Greenwich Theatre in October 2019.

Apart from a career in the Marines, I have worked in Railway Management and now run my own business, a large pub/restaurant with my wife. Over two families I have five children and four grandchildren.

Stuck in the Book

Library of Books and Tea

Many thanks to Robert J Fanshawe for his guest post and to Faye Rogers and Authoright for providing additional content for this post and organising the tour it is part of.