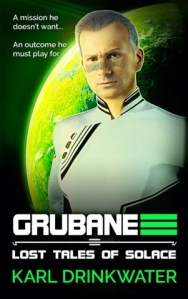 Major Grubane is commander of the Aurikaa, the most feared cruiser in the UFS arsenal.

His crew is handpicked and fiercely loyal. Together, they have never failed a mission, and their reputation precedes them.

But this time he’s been sent to a key planet that is caught up in political tensions at the centre of the freedom debate. What he thought was a simple diplomatic mission turns out to be the hardest choice of his career. His orders: eliminate one million inhabitants of the planet, and ensure their compliance.

Grubane has also rediscovered an ancient game called chess, and plays it against the ship AI as a form of mental training. But maybe it could be more than that as he finds himself asking questions. Can orders be reinterpreted? How many moves ahead is it possible for one man to plan? And how many players are involved in this game?

This is the second novella in the “Lost Tales of Solace” series, the first one is entitled “Helene” and is the one which introduced me to this author’s brilliant sci-fi/fantasy books with intriguing dilemmas and thought provoking scenarios.

In this story, Major Grubane is the lead character who is sent on what he initially assumes is a diplomatic mission but ends up being one where he is ordered to murder a million of the planet’s population. Major Grubane has been playing chess with one of his ship’s AI, Aurikaa12, and the story is told from their point of view, interspersed with papers on what Grubane has learnt by playing chess. He’s going to need all his skills and tactics to keep his ship and crew safe whilst still endeavouring to avoid having to carry out his orders to commit planet-wide genocide…..

This story is an enthralling read, a great addition to this series and additional prelude to the Lost Solace series. Major Grubane’s interactions with Aurikaa12 are believably portrayed, the dramatic events onboard the spacecraft brought to life in the reader’s imagination and the use of tactics learnt playing chess are key. Even if you don’t play chess, you can appreciate how what Grubane learnt playing it against Aurikaa12 impinges on his decisions and actions. It is a skilfully written and entertaining read, dealing with philosophical and moral dilemmas as well as being a fascinating read.

I thoroughly enjoyed reading this book and have no hesitation in highly recommending it and the other books in both associated series. This is my honest review after voluntarily reading this book.

Karl Drinkwater is originally from Manchester but lived in Wales for twenty years, and now calls Scotland his home. He’s a full-time author, edits fiction for other writers, and was a professional librarian for over twenty-five years. He has degrees in English, Classics, and Information Science.

He writes in multiple genres: his aim is always just to tell a good story. Among his books you’ll find elements of literary and contemporary fiction, gritty urban, horror, suspense, paranormal, thriller, sci-fi, romance, social commentary, and more. The end result is interesting and authentic characters, clever and compelling plots, and believable worlds.

When he isn’t writing he loves exercise, guitars, computer and board games, the natural environment, animals, social justice, cake, and zombies. Not necessarily in that order.

Many thanks to Rachel’s Random Resources for providing materials for this post and organising the tour it is part of. The review is my own, honest opinion after choosing to read this book.