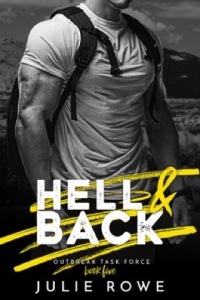 Title: Hell and Back

With the current COVID-19 pandemic, the idea of bioterrorism seems even more possible at the moment and this is an edge of your seat read about the threat of just such an event.

Ruby Toth is working in the CDC with her mentor, ex-Special Forces medic Henry Lee on the Outbreak Task Force. She’s attracted to the outwardly grumpy workaholic but she’s actually undercover trying to discover just who is leaking sensitive information.What a dilemma she faces when her twin brother is kidnapped by terrorists who contact her and demand she gets them viable samples of Smallpox virus or they will kill him, piece by piece. This is just the evening before she’s due to visit one of the few sites with Smallpox vaccine. How did the terrorists know she’d be going there? How did they know just what is stored there? Is there anyone she can trust to help her to save her twin?

This is a contemporary action-packed, fast paced story with medical science, mercenaries, danger and daring. Ruby’s family are very involved with the fight against terrorism and I was particularly intrigued by her brother, Nate, and really hope there will be a future book in this series with him as a main protagonist. If you enjoy hot, romantic suspense where the characters keeping facing further hazards, look no further, this book is for you. It is an enthralling read which I didn’t put down until I’d finished it and now I can’t wait to read more stories in this fantastic series.

Thanks to Entangled Publishing and NetGalley for my copy of this book which I have read voluntarily and honestly reviewed.

Racing to lock down the CDC’s deadly virus samples from terrorists, ex-Special Forces medic Henry Lee partners with Ruby Toth on the Outbreak Task Force. But the terrorists always seem one step ahead. As they work side by side, Henry’s taken with how Ruby accepts and respects him, instead of pitying him for all he lost overseas, including his leg. Ruby’s hiding something, though, and Henry fears she’s been leaking sensitive information.

Terrorists have kidnapped her brother, and now microbiologist Ruby Toth faces a horrible choice. If she doesn’t give them a vial of Small Pox as ransom, her brother will die. She knows her prickly—yet very hot—boss, Henry, could provide the help she needs. But she joined the CDC to root out insiders plotting to unleash a bio-engineered pandemic, and she can’t trust anyone. Not even Henry.

Each book in the Outbreak Task Force series is STANDALONE:
* Viable Threat
* Smoke & Mirrors
* Sleight of Hand
* Search and Destroy
* Hell & Back