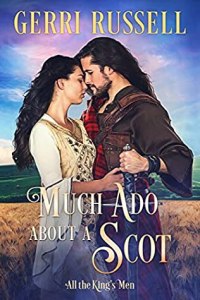 Title: Much Ado About a Scot

This is a suspense filled historical romance in which another of the seven King’s men draws the short straw and is sent on an undercover mission to discover the whereabouts of Lord Bothwell, the cousin  and treasonous enemy of King James VI.

This time it is Alexander Godric Ross who is the soldier concerned. He has ascertained where they suspect Bothwell is staying and that the twice widowed Isobel Seton who owns the neighbouring estate needs help urgently to get her harvest in. A staged encounter has her rescuing him from the pillory on condition he handfasts with her for two months rather than the usual year and a day. So starts an action packed story filled with intrigue, plots, accusations of witchcraft, secret tunnels. broken promises and romance. It is a great addition to this series, with the King’s men having to come to the rescue yet again! It is a story that proves sometimes the short straw is the lucky one!

Thank you to Tule Publishing for my copy of this fascinating book which I voluntarily read and have honestly reviewed.

She needs a husband to secure her lands and her child’s legacy, even if she has to drag one from prison…

Isobel Seton is about to lose everything unless she can convince a man to marry her. Twice widowed, no man in Haddington will say “I do”—until she finds a handsome stranger locked up in the village pillory. She offers to free him in exchange for marriage. He agrees, but with rules: no questions about his past and the marriage will only last two months—not a day longer.

Alexander Godric Ross—one of King James VI’s top soldiers—is undercover and on a mission. He’s to infiltrate a network of spies he believes are helping the king’s nemesis, Lord Bothwell. Aiding Isobel Seton is exactly the cover story he needs. Yet, as the nights pass, Alexander finds himself losing his will, falling for his wife and succumbing to a passionate love affair.

When a mysterious fire destroys her crops and Isobel is arrested for witchcraft, Alexander finds himself facing his most cunning enemy yet as he sets out to save his wife.

This entry was posted on October 3, 2020 by Splashes Into Books in Adult and tagged 4.5*, Adult, Adventure, All the King's Men, Gerri Russell, Historical, Life and Living, Much Ado About a Scot, Murder, Mystery, Romance, Series, suspense, Tule Publishing.