New Beginnings at the Little House in the Sun 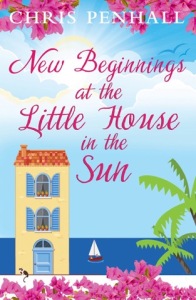 Alice Dorothy Matthews is on the road to paradise! She’s sold her house in London, got rid of her nasty ex and arranged her move to Portugal where friendship and romance awaits. All that’s left to do is find a place to call home.

But Alice’s dreams are called into question when complications with friends, work and new relationships make her Portuguese paradise feel far too much like reality.

Will Alice’s dream of a new home in the sun come true ?

This is the sequel to The House that Alice Built and continues Alice’s adventures as she endeavours to find a home in Portugal, reconnecting with the friends she made there, including the man she loves. She’s exploring the possibilities of work there, discovering that someone else seems to be buying up local properties – including the one she’s currently staying in.

There are surprise revelations, new opportunities, family dramas, arguments and even a car chase in this story which is set in a delightful small community. It is a heartwarming story filled with trials and tribulations as you just know nothing will go as smoothly as Alice has hoped. It is a relaxing read even though there are plenty of disagreements and worries revealed as the story progresses, just to keep you uncertain of the final outcome! There are also some herbal teas which I’ll definitely avoid trying!

Chris Penhall won the 2019 Choc-Lit Search for a Star competition, sponsored by Your Cat Magazine, for her debut novel, The House That Alice Built. The sequel, New Beginnings at the Little House in the Sun was published on August 25th 2020.

Chris is an author and freelance radio producer for BBC Local Radio.

Born in Neath in South Wales, she has also lived in London and in Portugal, which is where The House That Alice Built is set. It was whilst living in Cascais near Lisbon that she began to dabble in writing fiction, but it was many years later that she was confident enough to start writing her first novel, and many years after that she finally finished it!
A lover of books, music and cats, she is also an enthusiastic salsa dancer, a keen cook, and loves to travel. She is never happier than when she is gazing at the sea.

This entry was posted on November 18, 2020 by Splashes Into Books in Adult, Blog Tour and tagged Chris Penhall, New Beginnings at the Little House in the Sun, The House That Alice Built.