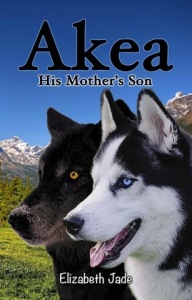 Akea is no ordinary husky and taking her place as Wolf Queen was just the first step in the journey set out for her by the Great Wolf. Akea’s world turns upside down when humans raid their home, scattering the pack and capturing her hybrid son. Salvador struggles to adjust to a life in captivity quickly realising not everyone approves of his mother’s rise to Wolf Queen. When the Great Wolf sends him warning dreams, Salvador discovers his true purpose for being there.

“Ms Jade perfectly captures the atmosphere of life as part of the wolfpack and its many challenges. Her stories remind me of Jack London’s Call of the Wild, and with ‘His Mother’s Son’ she proves she not only has a knack for creating realistic and powerful characters, but a talent for describing the wild settings they inhabit with a natural confidence that is quite charming.” Colin Garrow (author) 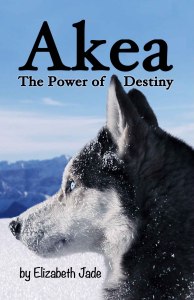 I really enjoyed reading the first book in this series: Akea – The Power of Destiny so jumped at the opportunity to read this sequel. The first book tells the story of Akea and the lone wolf, Kazakh, as the two forge links to challenge their present and achieve their destiny and Akea becomes the Wolf Queen. In this sequel, the focus is more on the next generation – their four pups, Gwenevier, Fayth, Adair, and Salvador. Each has their own quirk, but this story has Fayth and Salvador as the focus.

Fayth has inherited some of her mother’s powers and can sense dangers ahead of the pack. Salvador is a loner, more wolf than husky, a thinker and an innate leader. When Salvador is captured by humans he starts to come into his own powers, becoming the leader of a captive pack. When he discovers that the Great Wolf is sending him warning dreams he knows he needs to escape to help prevent his parent’s pack being annihilated and his mother killed. Can he escape captivity and gain the support of his fellow captors to come to the aid of his family?

The life of the wolf pack is brought to life in this story. It feels like you slip into the story to become an active participant in the events, getting to know the different characters, their locations, emotions and events are so brilliantly portrayed. The story is actually published as a children’s story but it is just as enthralling to read it as an adult – and it is only just over 90 pages long so ideal when you’re looking for a novella length read. There is a pronunciation guide at the beginning of the book to help readers know how to say some of the more unusual names of the wolves and there are beautiful black and white illustrations at the beginning of each chapter.

As I said for the first book, this is a series that will appeal to animal lovers of all ages. It is a fantastic story of family love, working together, dreaming your dreams, working to achieve your goals and overcoming obstacles. It is also a story of faith, trust and love. I suspect able readers will thoroughly enjoy reading this story independently and, like me, look forward to their being more adventures for this wolf pack and their offspring in future.

You can read my review of Akea – The Power of Destiny by following this link. 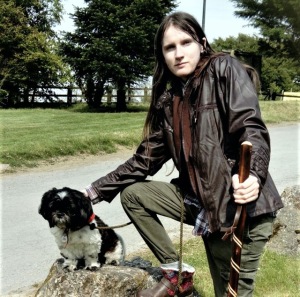 Elizabeth Jade was born in 1998 in Northallerton, North Yorkshire, England, but moved with her family to Wellington in Somerset when she was very young. Her early schooling did not go smoothly, and as a result, she was home-schooled from the age of seven. Her parents soon learned she had a unique slant on life and quickly abandoned attempts to follow the national curriculum in favour of child-led learning.

Elizabeth stumbled into writing at the age of fourteen when she began to suffer from anxiety and depression and quickly found her story ideas pouring out faster than she could get them onto paper.  It wasn’t until the age of eighteen that she realised her struggles in school had been due to Aspergers Syndrome (an autistic spectrum disorder).

As an enthusiastic animal lover, Elizabeth volunteered first at the Conquest Riding Centre for the Disabled and then at St Giles Animal Rescue before moving on to the Cats Protection Homing and Information Centre.  Her gifted way with the cats quickly earned her the title of ‘Cat Whisperer’ from the staff. Since she had always possessed such a way with animals, it was only natural for her story ideas to revolve around them.

Elizabeth’s personal experience as a young author with the challenges of autism, depression and anxiety, along with her writing theme of acceptance and overcoming obstacles, have led to her having a junior school class named after her.