My #Review for Her Reluctant Highlander Husband by Allison B. Hanson – brill historical romance! 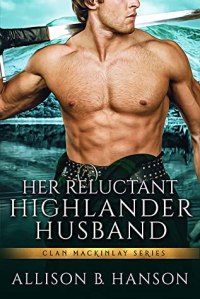 My thanks to Entangled and NetGalley for my copy of this book which I have voluntarily read and honestly reviewed. This is the second book in the Clan Mackinlay series but it may be read as a standalone although characters from the previous book also appear in this one – and it was great to catch up on them!

Bryce MacKinlay Campbell, war chief of Clan MacKinlay, has never recovered from returning from battle to discover his beloved wife and young daughter dead from fever. He is ordered by his Laird to marry Dorie McCurdy, who has never met, to help forge an alliance between the two clans. He’s shocked when she arrives in an ill fitting gown, dishevelled and with bare feet. She’s also mute. Her family’s treatment of her shocks him and he agrees to provide for her but says he’ll never love again.

For the previous nine years Dorie McCurdy has lived in a single room, a prisoner, terrified of what will happen if she speaks again. Both have suffered enormous loss and heartbreaking pain. Can they help each other heal and find a new reason to live – together?

This story is packed with family drama and secrets. With the McCurdy clan plotting, Dorie’s life in danger and there’s a scruffy pup, Rascal, that grows into a huge protector. Dorie’s father is an intriguing addition to the story and his actions, motivations and plans aren’t revealed until the end. This is a fascinating addition to the series which I thoroughly enjoyed escaping into and have no hesitation in highly recommending to anyone who enjoys historical Highlander romance and drama.

After nine lonely years as her father’s prisoner, Dorie McCurdy is forced to marry the new war chief of clan MacKinlay. Terrified and unwilling to speak, she imagines the worst of her handsome, imposing new husband.

Bryce MacKinlay Campbell’s wife and child were taken by illness years ago, and all he’s wanted since is to be alone. Unfortunately, he is ordered to marry the McCurdy laird’s daughter for an alliance between their clans. He’s appalled by the way his bride is treated by her family when she shows up looking like a ragged, homeless waif. Bryce can provide for her needs, and offer his name, but not his heart—that will never happen again.

In her husband’s strong arms, Dorie slowly emerges from her silence…and gradually the ice around Bryce’s heart begins to melt. But when she is unexpectedly offered an annulment, she must choose—stay with Bryce, who she’s fallen in love with but who never wanted her, or choose the unknown possibilities of a different future.

Each book in the Clan MacKinlay series is STANDALONE:

The first book in the series is
Her Accidental Highlander Husband

One comment on “My #Review for Her Reluctant Highlander Husband by Allison B. Hanson – brill historical romance!”