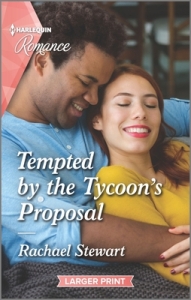 Title: Tempted by the Tycoon’s Proposal

This cover really should have included Lily in the photograph! She’s the precocious daughter of billionaire widower, Jack McGregor, and she should really be nicknamed Cupid as she’s instrumental in bringing her Dad and hotelier Sophia Lambert together.

This is a delightful, moving, contemporary romance in which Jack has trust issues, including not trusting himself to be worthy of love from anyone except his daughter and Sophia has dreadful guilt feelings after something happened to her sister – you need to read it for yourself to discover why both main characters feel so guilty! It is Lily who steals the story for me, such a determined young cupid, she knows her father’s heart before he does! The visit to Iceland is beautifully described, and their special accommodation sounds like a fantastic experience.

I should warn you that this is the sort of book that once you start you want to keep turning the pages until you’ve read it. It is an enthralling story to escape into and one that I thoroughly enjoyed reading. I have no hesitation in highly recommending it to anyone who enjoys contemporary romances between a billionaire father and a young woman who previously was only focussed on achieving her best.

Thank you to Rachel’s Random Resources for my copy of this book which I have voluntarily read and honestly reviewed.

A second chance…
With the single dad?

When hotelier Sophia Lambert finds billionaire Jack McGregor’s runaway daughter, a thank you dinner sounds harmless. Until Sophia finds herself tantalizingly attracted to Jack… The deeply desirable single dad re-awakens long-buried emotions in Sophia, but his jet-set life is beckoning. Unless Sophia can tempt him with her own proposal: to keep his feet on the ground… 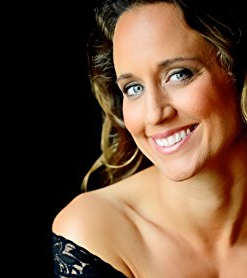 She’s been writing since she could put pen to paper as the stacks of scrawled on A4 sheets in her loft will attest to, and the lovingly bound short stories that her father would run off at work and proudly share out with his colleagues. Thinking it was a pipe dream to be published one day, she pursued a sensible career in business but she was really play-acting, achieving the appropriate degree and spending many years in the corporate world where she never truly belonged. Always happiest when she was sat at her laptop in the quiet hours tapping out a story or two. And so here she is, a published author, her full-time pleasure, a dream come true.

A Welsh lass at heart, she now lives in Yorkshire with her husband and three children, and if she’s not glued to her laptop, she’s wrapped up in them or enjoying the great outdoors seeking out inspiration.

*Terms and Conditions –Worldwide entries welcome.  Please enter using the link to the Rafflecopter box below.  The winner will be selected at random via Rafflecopter from all valid entries and will be notified by Twitter and/or email. If no response is received within 7 days then the organiser reserves the right to select an alternative winner. Open to all entrants aged 18 or over.  Any personal data given as part of the competition entry is used for this purpose only and will not be shared with third parties, with the exception of the winners’ information. This will passed to the giveaway organiser and used only for fulfilment of the prize, after which time they will delete the data.  I am not responsible for organisation of the giveaway or the despatch or delivery of the prize.