#Interview with A Frosh, one of the authors of Space Taxis #BlogTour

I am happily sharing the answers given to my questions by Adam Frosh about the book, Space Taxis, which he co-authored with his daughter, Harriet. Read on to discover more about the inspiration for the book, their writing process, them and the book itself! 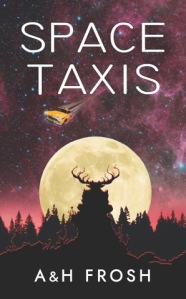 I am a consultant surgeon working in Hertfordshire, England, and I never really thought about writing fiction until the idea for Space Taxis came along. Harriet, (my co-pilot in Space Taxis) is my daughter, and she’s about to graduate in her English degree. Harriet has been writing since she was a young teenager.

I never originally intended to write a book. I never thought I had it in me. It all started when the young Harriet and I stopped at a KFC drive-through in Hatfield, UK when Harriet pointed to a London black taxicab and said, “What’s a black cab doing all the way out here?”

“Out here in space,” I replied, remembering a line in the original Star Wars movie.

The banter continued and the next thing we’d got a story idea about a New York cab driver interacting with his alien passengers:

“Get out of my cab you slime ball! I’ve had a fair share of slime balls in my cab in my time but never a real one.”

We were laughing about the story for days afterwards, but never really thought we would write a novel with it.  The more we talked about it, we decided it would be fun to make a comic story out of it.

We found a potential comic artist. He was really enthusiastic, loving the idea right from the start. He, however, had a full-time job in another industry and his personal life was busy and he pulled out. Harriet and I by this time had a fully formed story in our heads and so we decided to write it as a novel.

I’m definitely a pantser but with an envelope of a plot. Ideas often come to me when I’m talking to others. People are fun even when they themselves don’t realise it. Stories are about people, so they are my major source of ideas.

I find time to write before work, after work, and at weekends. I take micro distraction breaks so that complex ideas are given a chance to be processed in my subconscious.

Definitely a computer as it has extraordinary editing control. My handwriting is so terrible that even I can’t read it!

My personal favourite character in Space Taxis book is Agent Vernikell. His alien sense of moral intellect and compassion is also a very endearing human quality.

I would dearly love to be able to transition in the way that the main character, Mike Redolfo transforms from a good-hearted taxi driving bruiser to a deep-thinking individual who has uncovered amazing secrets about himself.

Most of the characters’ names derive from ancient Celtic names. The name of Ariael Vernikell (my favourite character), is derived from the Hebrew (Israeli) first name Ariel, meaning “Lion of God”. His surname, Vernikell comes from the Viking raider who was witnessed by the Anglo Saxons to shout, “Bairn ni kell!” which meant “Don’t kill the children!” The name Barnacle became popular as a Viking name derivation and this transformed in some cases to Vernikell.

Thank you so much for answering my questions, Adam, I can quite understand why it would be great to be able to transition like Mike!

Read on to find out more about  Space Taxis and both of its authors:

“A perfect blend of science fiction and alternate history”

He’s abducted by aliens to the planet Vost.

He’s saving up for his fare home.

In 1977 a New York Cab driver Mike Redolfo is abducted by aliens after being mistaken for a renegade scientist. Meanwhile, back in 1944 a mysterious man and his Jewish fiancée are fleeing across Nazi-occupied Europe.

Redolfo tries to keep a low profile on his new world whilst earning his fare home, but unwittingly gets involved with a shady gang of alien criminals, inadvertently bringing the planet to the brink of catastrophe.

As the link between the timelines becomes clear, Redolfo must discover secrets from the past that may hold the key to saving the planet.

If you like The Hitchhiker’s Guide to the Galaxy, Kurt Vonnegut’s Slaughterhouse 5, and Frank Herbert’s Dune, you’ll love this gripping and entertaining sci-fi mystery thriller.

Adam wasted much of his youth watching Star Trek on the TV and films like Planet of the Apes and Alien on the big screen. He redeemed himself by becoming a surgeon but has since graduated from writing articles for science journals into writing his own Sci Fi and Alternate History stories. As a writer he is dedicated to giving his readers a great story laced with strong, fun and scary characters. Descended from Jewish refugees who escaped from the pogroms, he is haunted by the stories of the Holocaust but inspired by heroes who put themselves at risk to save others. Adam likes to hear from his readers. You can find him at http://adamfroshauthor.com or on his Facebook page https://www.facebook.com/AdamFroshAuthor

Harriet will never be able to let go of Greek gods. No, not the sculpted Adonis-like figures on the beach, but the ancient ones.
Loving all things mythological, her writing incorporates myths and legends from around the world. Her other fascination is with the criminal mind, and you can expect to see a blend of these two interests in her writing.
As a student of English, she spends her day critiquing literature and her evenings creating exciting characters and fun stories.
Harriet is also an artist, and she would like to hear from her readers and those interested in her art. You can get in contact at http://harrietfrosh.com/