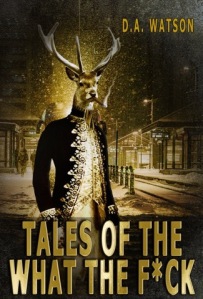 Billionaire terminal cancer patient John Longmire’s going to die today, and he’s going out in style in the classiest euthanasia clinic in the world. But the strange nurse with the clipboard and the look of a goddess is spoiling the mood, with all her irksome questions about how he’s lived his life.

Recent retiree Gerald loves his wife Barbara and he loves his garden, but Barbara hates the garden. Because the garden’s taking Gerald over, and Barbara says he has to stop before he has another ‘incident’.

Bullied, ridiculed and unloved, moustachioed schoolgirl “Hairy” Mhairi Barry has never had any friends but the ones she finds on the shelves of the library where she’s spent most of her lonely childhood. But tonight, she’s going to a party with all the cool kids, to show them what she’s learned in all those books.

A suspicious smelling smorgasbord of lovelorn psychopaths, vengeful mugging victims, pawn shop philosophers and rhyming Glaswegian alien abduction, Tales of the What the Fuck is a dark, touching, horrific and hilarious collection of short stories, flash fiction and epic poetry from People’s Book Prize nominated author D.A. Watson. Things are about to get weird. 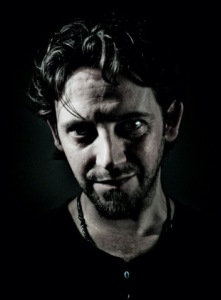 D.A. Watson was halfway through a music and media degree at the University of Glasgow and planning on being a teacher when he discovered he was actually a better writer than musician. He unleashed his debut novel In the Devil’s Name on an unsuspecting public in the summer of 2012, and plans of a stable career in education left firmly in the dust, later gained his masters in Creative Writing from the University of Stirling.

He has since published two more novels; The Wolves of Langabhat and Cuttin’ Heads, a collection of short fiction and poetry, Tales of the What the F*ck, and several acclaimed articles, poems and stories, including Durty Diana, which was nominated for a Pushcart Prize in the US in 2016, and the Burns parody Tam O’ Shatner, prizewinner at the Falkirk Storytelling Festival and Dunedin Burns Poetry Competition, and nominated for the People’s Book Prize in 2018.

Watson’s writing has appeared in several anthologies and collections including 404 Ink, Dark Eclipse, Speculative Books, Haunted Voices and The Flexible Persona, and he is also a regular spoken word performer, with past gigs at Bloody Scotland, Tamfest, Sonnet Youth, Express Yourself, Clusterf*ck Circus, and the Burnsfest festival in 2018, where he appeared on the main stage as the warm up act for the one and only Chesney Hawkes, a personal milestone and career highlight.

His fourth novel Adonias Low will be released by Stirling Pubishing in 2021. He lives with his family in a witch infested village on the west coast of Scotland, and continues to write some seriously weird sh*t.

Many thanks to Rachel’s Random Resources for providing the content for this post and organising the blog tour it is part of.