Fantastic #Historical #RomanticSuspense – All Scot and Bothered by Kerrigan Byrne 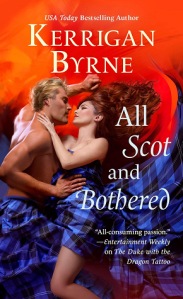 Title: All Scot and Bothered

This is a fabulous historical romance packed with additional mystery, suspense and dangerous intrigue! This is the story of Cecelia Teague and Cassius Gerard Ramsay. It is the second story in the ‘Devil You Know’ series, the previous story being ‘How to Love a Duke in Ten Days’. I suspect having read the first story added to my enjoyment of this one but think it could still be enjoyed as a standalone.

In the Victorian era, women were supposed to know their place and not aspire to do certain things which were purported to be the prerogative of men only. The Red Rogues flouted conventions like that. They are three university educated young ladies, best friends and very bright – often cleverer and quicker then their male counterparts, much to many males’ chagrin!

Cecelia Teague was whisked from her dreadful childhood home, where showing any sign of her intellectual prowess was punished, to live in a prestigious boarding school, which is where she met the other two Rogues. When Cecelia has an unexpected inheritance, she finds herself the owner of a gambling hell and a school for girls and ladies and the protector of a young girl, Phoebe. How are the these all connected? As she seeks to discover the connection,  Lord Chief Justice of the High Court, Cassius Gerard Ramsay comes calling, implying her inheritance involves illegal activities which he is determined to cease. However, as the attraction between the two develops, there are others out to stop Cecelia uncovering the truth. Can she trust Ramsey? Her heart says yes, but she’s wary – and so is he!

This is an action packed thrilling historical romance and brilliant, intriguing series. It is a great read that has you eagerly turning the pages as the drama unfolds. Phoebe is a delightful, precocious young lady and there are surprise revelations about her, too. This is a fantastic addition to this series and I can’t wait to discover what will happen to the third rogue in the next book in this series, The Devil in Her Bed.

Thanks to St Martin’s Press and NetGalley for my copy of this book which I have voluntarily read and honestly reviewed.

All Scot and Bothered is the second book in the stunning Devil You Know series by USA Today bestselling author Kerrigan Byrne!

They are a dangerous duke, a fierce lord, and an infamous earl—dark, bold, brave men who know exactly what they want. And there is only one woman who can bring them to their knees…

He is first and foremost—at everything. A man who’s made his own way through ruthless cunning and sheer force of will. A strong and imposing Scot who can turn on the charm but does not suffer fools. His title: Lord Chief Justice of the High Court. His name: Cassius Gerard Ramsay. His mission: To investigate the goings-on at London’s most notorious gaming hell, owned and operated by one of the most intriguing and desirable women he’s ever met.

IN THIS GAME OF LOVE, THE RULES DO NOT APPLY

Cecelia Teague was an orphan facing a rather dire future—until a secret benefactor from her mother’s scandalous past swept into her life. Sent to a prestigious boarding school and later to university, Cecelia believed high society was at her fingertips…Then, from out of nowhere, she became the inheritor of a gambling establishment. Now Cecelia must live two lives: one as a proper lady who finds herself undeniably drawn to Lord Ramsay and the other as a savvy gaming hell owner trying to save her business from the very same man. He has no idea she is both women…and Cecelia would like to keep it that way. But what happens when consuming passion and escalating danger threaten to reveal the truth?