HIs Touch by Patty Blount 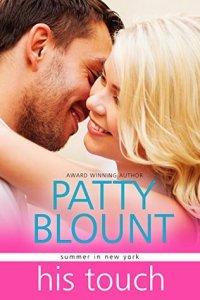 This is a great story with well developed characters, building on previous events but still robust enough to be read as a stand alone. I’ve enjoyed all the books I’ve read in this series and in the earlier series ‘Christmas in New York’ which included many of the same characters, each with an additional different focus. In this book that focus explores how childhood medical issues can impact on the child throughout their life and on how they interact with others.

Bree, Elena, Kara, Jade and Cassandra are best friends and relate to each other as though they are sisters. Their mothers had been sorority sisters in college and had remained best friends afterwards. Their children had grown up sharing holidays and key family events together. They do have real siblings too and this book is one in a series by different authors about the girls and their relationships.

Single Mum, Kara, has an eighteen month old daughter, Nadia. She’d been in a long term relationship with Nadia’s father even moving to New York with him but he’d run off as soon as they confirmed she was pregnant. Kara is an independent lady, with a great ob and support network of family and friends but she really misses her Mum, who was tragically killed in the 7/11 Twin Towers attack. She particularly misses her when she’d like help or advice about Nadia.

Read is a NYFD paramedic who lost his brother in the same disaster. He later also lost his daughter in a tragic accident, her loss impacting negatively on his relationship with his now ex-wife leaving him divorced and alone.

The three first meet when Nadia runs off whilst her Mum is shopping in a store. He shouts at Kara, suggesting that she’s an inadequate mother and should pay more attention to her daughter and less to her mobile. He does regret this, especially as they keep meeting unexpectedly and attraction flares but both are extremely wary. Can they put the tragic events of the past behind them and build a future together?

Thanks to the author, publisher and NetGalley too,
for letting me read an ARC in exchange for an honest review.

Book 1: His Touch by Patty Blount
Book 2: His Kiss by Jolyse Barnett
Book 3: His Love by Jennifer Gracen

Book 1: This Christmas by Jeannie Moon
Book 2: All I Want for Christmas by Jennifer Gracen
Book 3: A Light in the Window by Jolyse Barnett
Book 4: Goodness and Light by Patty Blount

2 comments on “HIs Touch by Patty Blount”

This entry was posted on July 26, 2015 by Splashes Into Books in Adult and tagged 4*, Adult, ChickLit, Contemporary, His Touch, Life and Living, Patty Blount, Romance, Series, Summer in New York, Tule Publishing.