#Interview with Ralph Robb, author of ‘More Than a Game’.

Author Ralph Robb has kindly answered my questions and I’m delighted to share his responses along with more information about his book, More than a Game, and him. Read on to discover his responses!

As a teenager I belonged to a karate club that took on the name of the organization in which we practiced – Wolverhampton YMCA. The same vicinity served as a club house for an all-black football team, to which several members of the karate team also belonged.

Many of their experiences were shared between club members, painting a tapestry of characters and events both uplifting and heart wrenching. It is from these stories that the inspiration for the book evolved.

What is your writing process? Do you write using pen and paper or on a computer?

These two questions can be answered by rolling them into one.

Stories sometimes only come to me after weeks of pondering followed by research to determine if my ideas are workable. During the pondering stage I make endless handwritten notes, most of which are scrapped. As the character and story begins to take shape, it’s then that I begin to consider typing onto my computer.

Mr. Mervyn Palmer, the sixty-three-year-old father of one of the players, who always bring a smile to my face. Formulating his character was the most interesting, as it emphasized a trait, I see all too often. He portrays an older man that had failed to come to terms with his disappointing past and the subsequent regrets of bad decisions. He blames everyone else, including his children for the situations he finds himself in. His lack of empathy and conscience are grating but ultimately, he’s humbled by time and wisdom.

I would probably have to say Horace McIntosh. He’s the older level headed trainer of the younger football players. The story is somewhat told around his experience with the players and his stabilizing influence on the turbulent lives of these young men.

I try and base the personalities of the characters on a variety of people I’ve met throughout my travels, often amalgamating several into one. Then when I have a more in-depth character trait, I search for a name I believe suits that character. Whenever possible, I try to avoid stereotypes, which can be difficult, but sometimes it’s necessary.

Thank you so much for your great answers to my questions, your answers give a fantastic insight into your book and I suspect other people will be as intrigued as I was to read them.

Read on to discover more about Ralph Robb and his book, More Than A Game: 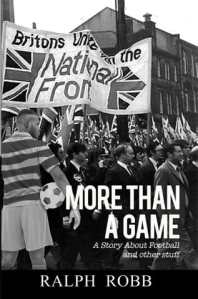 Sabina Park Rangers is the first team of black players to reach the final of the Watney’s Challenge Cup. But coach Horace McIntosh has more selection problems than most. The First Division champions want to sign one of his best players – and right up until the day of the match he is uncertain that he will have a team for the biggest game in the club’s history because of arrests, a scam and an atmosphere of impending violence.

Ralph Robb was born and raised in the industrial town of Wolverhampton, England, and now lives in Ontario, Canada with his wife, two cats and a dog. A proud father of four, Robb works as an engineering technician and loves rugby, martial arts and of course a good book. His world is balanced by his obsession with comic books, quality TV, global events and the great outdoors.