My #Review of Mistletoe and the Mouse by Elsa Simonetti – Disney magical festive read!

Mistletoe and the Mouse 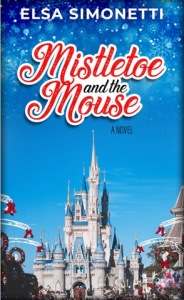 Can a magical Christmas melt a frozen heart?

Join Belle and James as they visit Mickey Mouse for a sparkling holiday season at Disneyland Paris.

Belle has been numb since her mother died, and she can’t face Christmas at home without her. Instead she books a surprise holiday to her “happy place” – the Magic Kingdom. But her boyfriend James has problems of his own. He doesn’t “do Disney” and what will his mother think of him missing their family Christmas to go to Disneyland with Belle?

A festive romance with a sprinkling of Pixie Dust.

This is a delightful, festive read concerned with coping with loss, being there for each other, all mixed with a lovely sprinkle of fairy dust and the inimitable Disney magic.

Belle and James have had a traumatic time together after her mother died very early in their relationship. Now she surprises him by booking them a Christmas holiday to her Mum’s favourite place, Disneyland Paris. Unfortunately, Disney really isn’t something James looks forward to with anything like the same enthusiasm – he’d much rather be playing or watching rugby and he worries about his Mum’s reaction to him not being home for the festivities. Will this make or break their romance?

Coping with grief and the memories of a parent who has died impacts different people in different ways. For Belle, she’s trying to do the things her Mum had hoped to do with her and she’s forever mentioning her and what she’d do to James. James just wants Belle to be happy and this causes some strains, especially as they generally like such different things. There are also surprise revelations from someone else who lost their parents and these show you really shouldn’t judge people until you really know them. However, there’s a fairy godmother in waiting and some surprise revelations, too, as this heartwarming story progresses and Disney helps work its magic on them all and prove that it really is for all ages!

Thank you to the author and Theme Park Press for my copy of this book which I have voluntarily read and honestly reviewed.

Elsa Simonetti was born in the same year as Walt Disney World, but many miles away in the north of England. Her earliest Disney memory is crying during Bambi at the Saturday morning cinema club! It wasn’t until her own children were small that her husband introduced her to the magic of Disneyland Paris, and since then she has become obsessed, proving Walt Disney’s own belief that “Laughter is timeless, imagination has no age and dreams are forever”. That was the seed of this story – that Disneyland is not just for children, but for anyone who is young at heart.

One comment on “My #Review of Mistletoe and the Mouse by Elsa Simonetti – Disney magical festive read!”