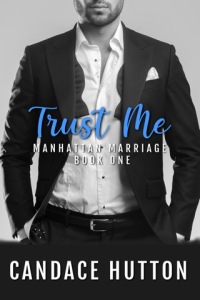 Brooke Anderson never pictured herself as a divorcee at twenty-eight. But when she mentions getting a post-nup to her husband Garrett after one deliciously sex-filled year, he promptly serves her with divorce papers. Admittedly, she could’ve told him about how her father left her and her mother homeless when she was young, and how she’s never been wired to trust anyone. Especially those closest to her. Now, all she wants to do is avoid anywhere he might be so she won’t have to face him again.

But she’s not the only one who can’t seem to trust.

Garrett Call grew up with parents who married for money and wants no part of a life that puts material possessions above love. He reinvented himself in college, complete with a new last name so he couldn’t be tied to his family’s lucrative business. He never even told Brooke the truth. Admittedly, he could’ve handled the issue of a post-nup better with his ex-wife. Maybe he didn’t count on how much he was going to miss having her in his life.

When their best friends’ wedding forces the exes to see each other again, a dangerous man from Garrett’s world threatens Brooke’s life. And they realize the only way to save themselves is to finally learn to trust each other.

This is a hot steamy novella about a couple who have recently divorced despite still being in lust and love with each other because they haven’t trusted their partner with the truth about their upbringing or made time to actually talk about their dramatically different childhoods.

Her father was like a yo-yo, only coming back when he wanted more money from her mother, resulting in them in being homeless for a while. She’s scared of being left destitute and doesn’t realise the reason he doesn’t want a post-nup is because he’s actually very wealthy and due to inherit even more. His parents have only stayed together for the money, never for love. Their secrets and those of his father actually put them into danger in this second chance romance.

It is a second chance romantic suspense which shows the dangers of keeping big secrets, hiding who you really are and not being honest with those you purport to love. The two don’t seem to be able to get together without removing their clothes – even in restaurant washrooms. It is hot and steamy relationship with revelations and danger adding suspense to it all.

Candace Hutton was born and raised on books. She spent a great deal of her teenage years in libraries and bookstores and still tries to sneak off to them as often as possible. Some of her other favorite things are coffee, puppies, and the smell of rain. You can connect with her on Twitter @authorcandace

One comment on “Trust Me by Candace Hutton #2ndChanceRomance #Giveaway #BlogBlitz”